Minnesota will borrow to pay for roads and other construction projects 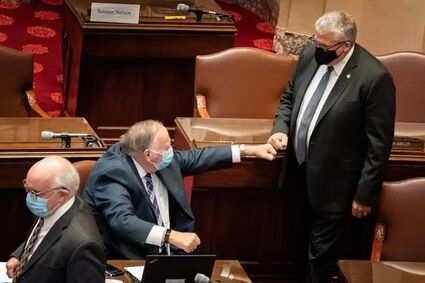 Sen. David Senjem, R-Rochester, the driving force for the bonding bill in the Senate, got a fist bump from Sen. Erik Simonson, DFL-Duluth. The Minnesota State Senate passed the bonding bill 64-3.

The Senate's approval of what's known as a bonding bill marked the end of months of contentious negotiations over a measure supporters say will provide an infusion of cash and jobs into state and local economies devastated by the COVID-19 pandemic. The state House passed the bill by a wide margin on Wednesday.

Groups that had lobbied for the bill celebrated it as a victory for communities and construction workers facing an uncertain future. Gov. Tim Walz, a Democrat, is expected to sign it in the next week.