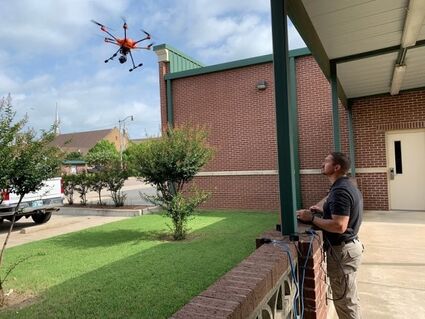 DURANT, Okla. – Week three of National Preparedness Month is "Prepare for Disasters." As part of the Choctaw Nation Office of Emergency Management's preparation, drones can be deployed to provide eyes in the skies during times of need.

From the 10½ counties of the Choctaw Nation to the aftermath of hurricanes in Texas, Florida and Puerto Rico, unmanned aircraft systems are proving to be an integral part of the technology used in bringing aid to disaster sites.

Drones entered the motor pool of Emergency Management's Mobile Communication Unit more than two years ago. Hansen pilots the single drone currently used by Emergency Management. But it is a program poised for growth. Plans are under consideration to train four additional pilots next year and to add a thermal-imaging camera for the drone, enhancing capabilities during missing person searches. Other aircraft platforms also are being looked at to enable safer flights in close proximity to structures.

Hansen said, "The Choctaw Nation Public Safety Unmanned Aircraft System program has been a tremendous addition to our overall mission. It has allowed us to get better data and assist local jurisdictions during complicated emergency responses."

For more information about the Choctaw Nation Department of Public Safety, visit http://www.choctawnation.com. To learn more about National Preparedness Month and be better prepared for disasters and emergencies, visit http://www.ready.gov/september.