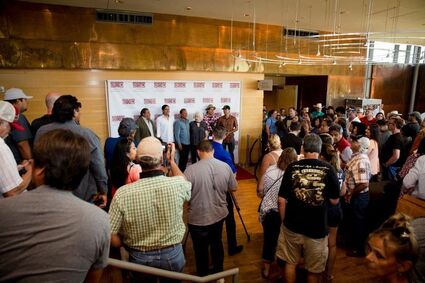 Crowds gather for red carpet photos and autographs during the 2017 Holba' Pisachi' Native Film Festival at the Chickasaw Cultural Center. This year's July 14 festival will spotlight Native American women with ties to the film industry.

Studi is an actress and live performance artist known for her roles in "Edge of America," "Dreamkeeper" and most recently for her self-authored play, "AND SO WE WALKED: An Artist's Journey Along the Trail of Tears."

Camp-Horinek is an actress and activist best known for her performance in the film "Barking Water" and recent supporting role in "The Chickasaw Rancher," currently in post-production

Proudfit helped establish The Native Networkers (TNN), a consulting company which provides resources to film and television industries that improve understanding and foster authentic representation of Native American and Indigenous peoples in storylines, exhibition and marketing campaigns. She has worked on high profile projects such as the 2017 film, "Hostiles."

Barbour is an artist and author who served as content producer/screenwriter for "Te Ata," "The Chickasaw Rancher" and "Bearer of the Morning: The Life of Te Ata Thompson Fisher."

Contemporary artist J. Nicole Hatfield will conduct a live painting throughout the day dedicated to this year's theme.

Film screenings will include "Blessed," "Barking Water," "Bearer of the Morning: The Life of Te Ata Thompson Fisher" and "Hostiles." Question-and-answer sessions will be held after the screenings.

A stomp dance demonstration by the Chickasaw Dance Troupe will be presented at 11:10 a.m.

Michaels is known for her successful run on season 11 of Project Runway in 2012, where she won the first runner-up title.

Deer specializes in using traditional applique techniques influenced by spirals and abstract floral designs of the Muscogee people from the Southeast.

Wheeler was recently honored for her contributions to the arts in Oklahoma during the 42nd Governor's Arts Awards.

Shackleford is a winner of many art competitions including the prestigious SWAIA Santa Fe Indian Market.

Hatfield's work can be seen on the "Strength of a Woman" mural located in the Bricktown retail district in Oklahoma City.

A red carpet photo opportunity and autograph session are part of the festival activities.

"Hostiles" will be screened at 6:30 p.m. followed by a question-and-answer session with Proudfit.

The festival theme is "Native Women En Masse: Harmony through Cultural Identity and Allegiance in Electronic Media." The focus will be on educating about the past, present and future of Native women's identities through their own ways of storytelling using various mass media tools.

The Holba' Pisachi' Native Film Festival is open to the public at no charge. Schedule is subject to change. 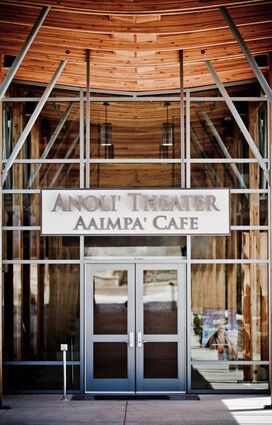 The Holba' Pisachi' Native Film Festival is set for 10 a.m. to 9 p.m. Saturday, July 14, in the Anoli' Theater at the Chickasaw Cultural Center, 867 Cooper Memorial Road. The festival will spotlight Native American women with ties to the film industry by way of filmmaking, producing, writing, wardrobe, marketing and cultural accuracy consultants.

1:45 p.m. Excerpt reading from "AND SO WE WALKED: An Artist's Journey Along the Trail of Tears," an original play written and performed by Delanna Studi

4:15 p.m. "Bearer of the Morning: The Life of Te Ata Thompson Fisher" documentary