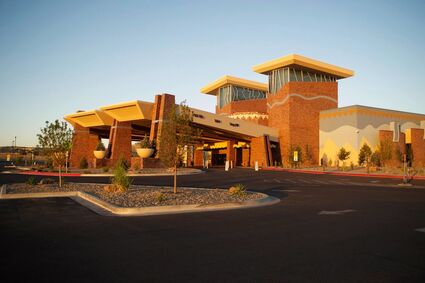 The Navajo Nation Gaming Enterprise (Navajo Gaming), is proud to celebrate the six-year anniversary of Northern Edge Navajo Casino in the Upper Fruitland Chapter, near Farmington, New Mexico on January 16th. The anniversary festivities include a celebration on the 16th with gaming and food promotions, live entertainment and complimentary cake... Navajo Gaming was established 10 years ago, and Northern Edge was the third Navajo Gaming Property launched after Fire Rock Casino and Flowing Water Casino.

"We say thank you to our host chapter Upper Fruitland, patrons and travelers to the Four Corners area that support Northern Edge Casino," shared Brian Parrish, CEO of Navajo Gaming. "We greatly appreciate the support from our Farmington community, The Navajo Nation President and his administration along with the Speaker, Navajo Nation Council and its committees, and our Gaming Board. We also express gratitude to our talented Northern Edge team members whose dedication and desire to create success has allowed us to provide hundreds of high-quality Navajo jobs, offer valuable training, and distribute millions of dollars in revenue to the Nation."

At 9:06 p.m., six names will be drawn to compete for a new ATV or cash prizes. Additionally, complimentary anniversary cake will be served on Tuesday, January 16, from noon to 3 p.m. and 5 to 8 p.m. The dinner special will be a delicious spaghetti dinner from 5 to 9 p.m.

Northern Edge Navajo Casino opened on January 16, 2012 and is nestled in the Four Corners area between Mount Blanca, Mount Taylor, Mount Hesperus and the San Francisco Peaks. It features multiple dining options including Cedar Bow Restaurant as well as slots, table games, and live entertainment every weekend. Its award-winning architecture and art incorporate traditional Navajo symbolism and design while appealing to the modern traveler.

Northern Edge Navajo Casino highlights from the past six years include:

o Providing thousands of dollars to Navajo and community vendors such as local farmers, Navajo Beef ranchers, artisans and musicians