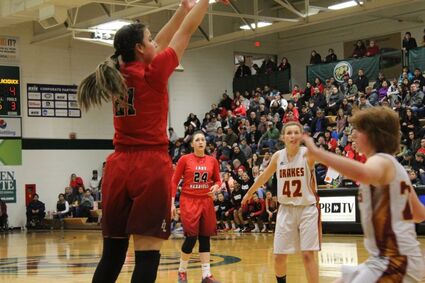 In the third meeting between these two teams, Red Lake was able to complete the sweep with a 72-51 win over Blackduck, ending the Drakes season and allowing the Lady Warriors to move on in the section 8A east subsection.

Red Lake did not have a great night shooting and Blackduck struggled with turnovers but it was the hot hand of Alexis Desjarlait that would give the Warriors the advantage.  Desjarlait would score 26 points, including 4 three pointers in the 2nd half that would spark the Warriors and keep them out in front.

Blackduck was led by the lone senior on the roster Michaela Sparby who had 23 points, along with 15 rebounds, but it wouldn't be enough and Red Lake will move on with a 21-2 record ending the Drakes season at 9-19.

Red Lake will face off with Lake of the Woods at noon Saturday, March 4, in Thief River Falls with a spot in the section semifinals on the line.

In other 8A action:

Having 37 turnovers in a tournament game didn't hault the Fertile/Beltrami Falcons from advancing to the next round against a higher seeded opponent in Red Lake Falls at UMC Thursday night.  The Falcons dominated the rebounding in the first half tallying 25 after eighteen minutes of play compared to Red Lake Falls' seven.  That total would balance out in the second half which still kept the Falcons at +20 in that category to finish off the night.

Fertile/Beltrami was 18-28 from the free throw line, 38 rebounds, seven steals and 37 turnovers

Falcons improve to 16-10 with the win and will face #2 seed Sacred Heart at 5:15pm at Ralph Engelstead Arena - TRF on Saturday evening in the 8A West semifinals. 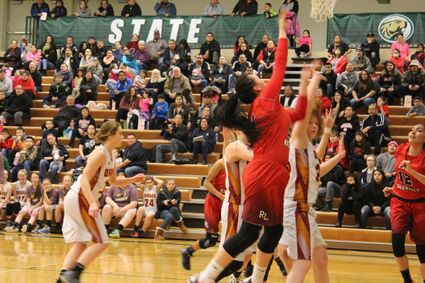