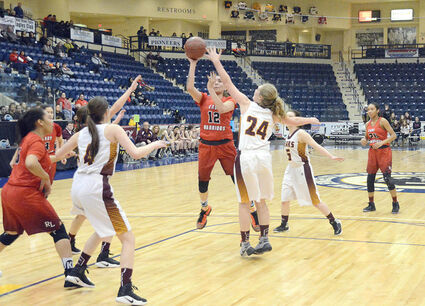 Red Lake's Alexis Desjarlait (12) shoots the basketball Saturday during the sub-Section 8A east semifinal game against Lake of the Woods at the Ralph Engesland Arena in Thief River Falls. (Micah Friez | Bemidji Pioneer)

THIEF RIVER FALLS -- The Red Lake girls basketball team took another convincing step towards a section championship on Saturday, topping Lake of the Woods 66-41 in the Section 8A quarterfinals from Ralph Engelstad Arena in Thief River Falls.

"Once we get a lead, we're never looking back. Always looking forward," Warrior assistant coach Nolan Desjarlait said. "We always want to distance ourselves once we get that big lead."

Another 9-0 run put the Warriors in a 34-8 lead, and a Danielle Seki baseline drive and layup gave Red Lake a 41-16 halftime advantage.

The Bears (13-12) couldn't climb out of its first-half hole, as the Warriors kept up the pressure. The difference hit 30 midway through the second, and they cruised from there. Cassidy Defoe's deep three with a minute left served as the exclamation point in the 66-41 victory.

Alexis Desjarlait poured in a game-high 17, while Angel McClain added 14 and Grace White 10. Seki pitched in nine and Gerika Kingbird eight in the balanced effort.

"It's a big plus when the other girls step up other than our other main two players," said Desjarlait. "When we play as a team, team ball with all five players, we're running on all cylinders."

The Warriors advance to the section semifinals, taking on Clearbrook-Gonvick at 6 p.m. on Tuesday, March 7, in Thief River Falls.

"We're taking it just one game at a time," Desjarlait said. "But longevity-wise, we know that we can go a lot further than what we've done in year's past."