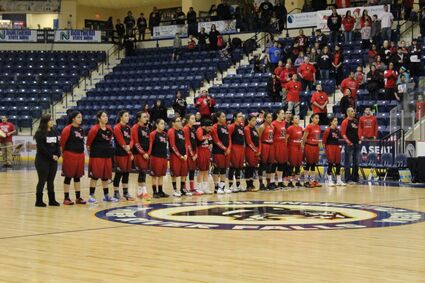 THIEF RIVER FALLS - Red Lake Girls advance in Section 8A East with 66-41 win over Lake of the Woods on Saturday afternoon, March 4, 2917 at the Ralph Engelstad Arena in Thief River Falls.

The Red Lake Lady Warriors jumped out to a 9-0 lead and never trailed in their win over Lake of the Woods on Saturday in Thief River Falls.

Alexis Desjarlait led the Warriors with 17 points and connected on three 3 pointers as Red Lake won their 13th straight game and improved to 22-2 overall.

The Bears didn't score their first points in the game until 4:08 had elapsed.

Red Lake carried a 41-16 lead into halftime and led by as many as 32 points in the second half.

The Warriors and Bears were scheduled to play each other during the regular season but the game was not played for different reasons.

The two teams are scheduled to play each other twice next year as the two teams will be in the same conference.

Red Lake will now face Clearbrook-Gonvick on Tuesday, March 7th for the East Sub-Section 8A Championship in Thief River Falls and will be broadcast on 96.7 FM. The Lady Warriros defeated Clearbook-Gonvick 81-71 on January 31st at Clearbrook-Gonvick.

In a game that featured thirteen lead changes the Clearbrook-Gonvick Bears were able to pull away late in the game and defeat the Fosston Greyhounds to advance to the East Sub-Section 8A Championship game on Tuesday. Liz Bodensteiner had a huge day for the Bears as she scored 36 points and helped Clearbrook-Gonvick improve their overall record to 19-9. The Bears and Greyhounds had met once during the regular season with the Bears winning at home 64-57 on February 14th. The game on Saturday was tied 23-23 at halftime and the Greyhounds led by as many as four points at 27-23 in the second half. The Bears would take the lead for good at 38-37 and would build their lead to as many as ten at 60-50. Sophomore Jaclyn Hubbard led the Greyhounds with 14 points as Fosston ends their season with a record of 19-9. Turnovers hurt the Greyhounds as they turned the ball over 29 times compared to 13 turnovers committed by Clearbrook-Gonvick. The Greyhounds graduate three seniors from this years team with Emily Curfman, Tess Hubbard and Emma Viken each playing their final game for Fosston High School on Saturday. The Bears will now play Red Lake for the East Sub-Section 8A Championship on Tuesday, March 7th at 6:00 pm in Thief River Falls (96.7 FM). Red Lake defeated the Bears 81-71 in their one regular season game against each other on January 31st at Clearbook-Gonvick.

Northern Freeze advance to the Section 8A West Championship Tuesday night at 7:45pm in Thief River Falls at the Ralph.

Stephen/Argyle was 17-24 from the free throw line, had 31 rebounds, seven steals, 17 turnovers

Eagles improve to 20-8 going to defend the West Sub-Section Championship on Tuesday night at 7:45pm in TRF.

Fertile/Beltrami was 10-15 from the free throw line, had 41 rebounds, eight steals, 33 turnovers

Ada Borup never trailed in their 63-45 victory over Park Christian Saturday afternoon.  The Cougars led by as many as seventeen before Park Christian rallied to end the first half with Ada Borup nholding a 30-19 lead. The Cougars scored the first seven points in the second half and outrebounded the Falcons, 29-14.Park Christian ends the season 16-12. Ada Borup has won 26 straight games, now 26-1 when they play Tuesday night for the sub section championship.

New York Mills would just out to an early lead, answer any challenge to that lead and then expand and run away with the game in the second half in defeating the Henning Hornets. Jennings would try to trim an early eight point deficit, but would only get as close as two points with Rhiana Roberts providing the offensive spark early for New York Mills as they maintained their lead and never trailed in the game. Midway through the first half Henning's Paige Wallevand became the Hornets all time career scoring leader and ended the game and her career with 1,304 career points. 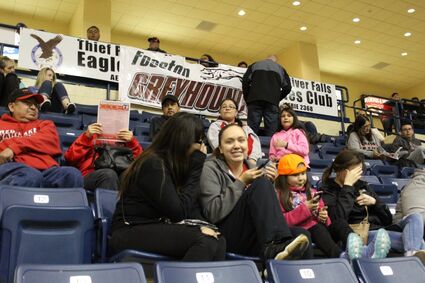