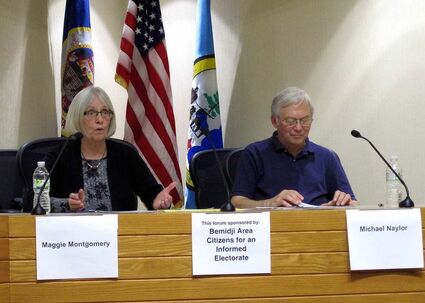 The Citizens for an Informed Electorate (CIE) will sponsor a candidate forum on Thursday, March 2, 2017. The purpose is to provide an opportunity for Ward 4 citizens to get to know the candidates who would serve them after the Special Election. The election for Bemidji City Councilor Ward 4 will be March 14, 2017. If no candidate receives 50% +1, a run-off election (top two vote getters) will be held May 2, 2017.

The forum will be televised live on First City TV, Cable Channel 2. The event will also be recorded and later streamed on Northern Community Radio's website (KAXE/KBXE) and rebroadcast on First City TV.

The CIE formed in 2008, seeks to provide an outlet for the public to gain more knowledge about candidates in order to make an informed decision at the polls.

The forums will allow candidates to make opening and closing statements. Moderators will collect written questions on 4 x 6 index cards from the audience, screen them for duplication or pertinence, then direct them to candidates, rotating who answers first. Questions should cover the gamut of issues, as the forum is open to the public.

The CIE represents a cross section of citizens and media members who want to provide opportunities for the public to know the candidates and issues. We include Michael Meuers, Michael Naylor, Barbara Meuers, Dennis Montgomery, Maggie Montgomery, and Rachelle Houle. Please plan on joining us.

Sponsored by Northern Community Radio (KAXE/KBXE), City of Bemidji, and the Citizens for an Informed Electorate.

Citizens for an Informed Electorate

* Could stretch to 9 pm if needed

RSVP's in the positive:

RSVP in the negative:

David Kostamo (Has moved to Omaha, NE, will be ineligible to serve but remains on the ballot)

 There will be no props, no signs, no t-shirts. Campaign buttons or nametags are allowed as well as campaign brochures, which may be handed out or displayed on a table.

 Video cameras are prohibited except by accepted media and CIE taping. CIE retains copyright on it's taping, and although CIE will make available a copy to candidates for their personal use for a nominal fee, the DVD copy may not be edited or used for any campaign purpose. 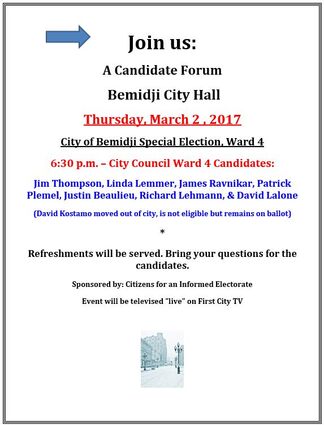  Each candidate will have a two-minute opening and closing.

 Each candidate will have one and a half minutes to answer questions. (Timers will be used)

 Order of speaking for the opening and closing will be decided by lot.

 The moderators will alternate who answers question between the candidates so no candidate need always answer first.

 Questions will come from the audience and written on 4 x 6 cards.

 During the event what the moderators decide is law.

 All Un-asked questions will be read at the end of the forum, so that candidates will know the mood of the electorate.