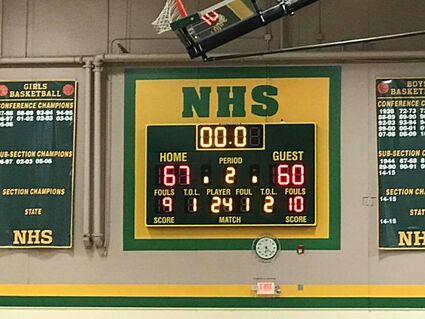 NEVIS - The Red Lake Warriors were looking for revenge on Friday, February 17, 2017, when they traveled to Nevis to take on the Tigers.

The two teams had met in Red Lake on January 24th, with Nevis dominating Red Lake to take home the victory, 60-40.

Red Lake usually scores 40 points in one half, but in that game, had just 20 points in each half.

The Tigers beat the full-court press and played tough defense throughout that game.

On the Tiger's home court, it was no different, but the Warriors hung right in right down to the buzzer and lost by just 7 points.

It was the 21st win for Nevis, their 16th in a row, as their only loss of the season came to Cass Lake on December 30th in a tournament in Park Rapids, a loss they made up for by beating the Panthers twice in January in regular season play.

The Warriors dropped to 18-4 on the season with the loss, as well as lost the Northland Conference Championship.