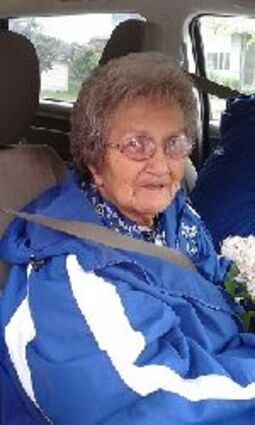 Doris Christena Heminger Burshiem was born on October 15, 1931 in Flandreau, SD to Christian M. Heminger and Lucinda M. (DeCoteau) Heminger. Doris crossed over from the church militant on earth to the church triumphant in heaven on February 10, 2017 at her home in Agency Village, SD surrounded by her family and friends.

Doris' family moved to the old Heminger homestead near Wilmot, SD then to the Big Coulee area in the late 1930s when they had a new house built on her mother's land. Doris attended grade school in the Guild Hall of the Ascension Presbyterian Church until the Big Coulee Day School was built. She then went on to high school and graduated from the Flandreau Indian School, Flandreau, SD in 1950. Doris went on to Haskell, which is known as Haskell Indian Nations University in Lawrence, KS and graduated in the field of Business Administration.

Doris' maternal grandparents were Isaac DeCoteau and Jeanette (Renville) DeCoteau. Her paternal grandparents were Rev. Albert Heminger and Ruth (Wakeman) Heminger. Ruth was a granddaughter to Chief Little Crow. Doris was baptized by her grandfather the Reverend Albert Heminger and he baptized her as "Dorsena Christena". Doris' siblings were: Jeanette (Heminger) Schoenrock, Vera (Heminger) Weston, Gerald "Little Joe" Heminger, Michael (who died as an infant), Virgil Heminger, Chris Heminger, Jr. and Shirley Heminger Isaac. Her mother had 2 infants that were not named.

Doris met and married William (Billy) J. Burshiem on July 3, 1954 in Wheaton, MN. To this union 5 children were born: William John, Jr. (who died as an infant), Yvette Wilma, Jenelle Renee, Carole Belle Lynette and Jennie Ruth. Doris had one other infant that was not named.

Doris and Billy worked and lived in Winnebago, NE; Minneapolis, MN; Pierre, SD and then returning to Sisseton area where she finished 20 years in the Bureau of Indian Affairs in the Realty Department. While employed at the BIA, Doris had the opportunity to help many SWST members with their wills and how they wanted their land and possessions divided up.

Doris was a member of the Ascension "Big Coulee" "Iyakaptapi" Presbyterian Church and was currently one of the ruling elders on the board of session. She also was a deacon, youth advisor, Christmas committee leader and fund raising committee leader for various events throughout the years. She also worked with the Ladies Aid ~ Wiyan Omniciye serving as various offices within the ladies group. One of her favorite works of the church has been singing in the choir. She came home for Christmas break when she was a junior in high school and went with her mother, Lucinda, to choir practice at the home of Malinda Spider and there she surprised her mother when she joined the "alto" section and has been singing ever since. She was taking piano lessons, but could put both hands together so she settled with singing instead! Her brother Little Joe also sang in the choir as a tenor.

Upon retirement from the BIA, Doris started working in her home district, the Big Coulee district. She served in various capacities. She served as one of the council representatives, at that time Big Coulee had two representatives. She served a partial year in 1982; 1983-1984; 1989-1992; 1995-1996. She was on council with her brother Gerald "Little Joe" Heminger, Sr. and her adopted brother Gerald "Smokey" German. Also while serving on council, she had the opportunity to travel as one of the Sisseton-Wahpeton Sioux Tribal Council members to bring back the remains of several Sisseton-Wahpeton Sioux Tribal members whose remains were repatriated from the Smithsonian Museum in Washington, DC. She was so proud of her nephew Russell Schoenrock who was one of the Viet Nam Veterans who guarded their remains until their proper burial at the SWST Repatriation Grounds. She also served when the birth of the gaming industry was created on the SWST reservation. She served as the district chairwoman. She served on various committees such as: SWCC Board of Trustees, Alcohol Advisory Board, Human Services Board, Elderly Board and Gaming Board. She said it was an honor to serve on the Human Services Board, as her mother, Lucinda, was one of the ladies who created the first Health Board on the SWST reservation. Whatever board, committee or commission that was established in the tribe, you could bet that Doris sat on every one of them as she served her district.

Doris was a cancer survivor. She beat breast cancer in May of 1983. She has always been a believer in prayer and knows that, that was what helped her beat the disease. Since then she was always been willing to talk with those who have went through the same trial.

Doris enjoyed going to bingo and casino. She is always helping with fundraising events and most of the time is the one behind the scenes setting everything up and making sure it is done right. Above all, her biggest joy is spending time with her family, not only her immediate family, but all her relatives and friends. She especially likes being around her grandchildren and great grandchildren.

Doris is survived by her daughters: Jenelle, Carole and Jennie all of Sisseton, SD; her adopted daughters whom she raised as her own: Vera Heminger, Kayla LaBelle, Adria Williams, Casey Heminger, Dakota RedBear and Aleena Blackthunder. She is also survived by her sister Shirley Heminger Isaac; many grandchildren, great-grandchildren, cousins, nieces, nephews, her other adopted children and grandchildren (too numerous to name, but you know who you are) her God-Children: Roland Heminger, Kim Wanna and Tina Motah and a host of friends.

Doris was preceded in death by her husband William Burshiem, Sr., son-William Burshiem, Jr. and daughter-Yvette Burshiem Kohl; her parents Christian and Lucinda (DeCoteau) Heminger; her paternal grandparents Reverend Albert and Ruth (Wakeman) Heminger; her maternal grandparents Isaac and Jenette (Renville) DeCoteau and a host of other relatives and friends.