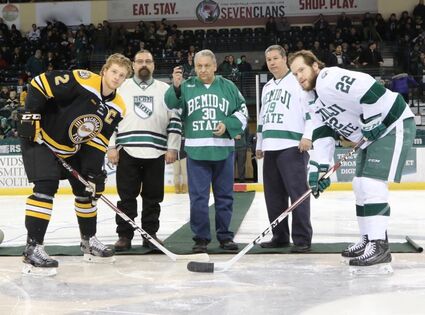 Bemidji State University (BSU) and the Sanford Center hosted the 5th Annual Native Nations Night on Friday evening, February 3, 2017. Billed as "a night to honor the Native peoples and heritage of the Bemidji region," the evening's fans would watch the BSU Beavers men's hockey team beat the Michigan Tech Huskies 4-2. The game was scheduled for 7:07 p.m. at the Sanford Center in Bemidji.

But prior to the game, a ceremonial "Puck-drop" would take place. The evening's events featured discount tickets for all tribal members at $12 for adults and $5 for age 17 and younger. After the game, Canadian First Nation member and BSU hockey player Zack Whitecloud would visit with fans and sign autographs.

Upon entering the Sanford Center lobby, one was immediately immersed in a quite festive atmosphere. Inside the arena, bright lights punctuated by an occasional light show and thundering rock music added to the mirthful mood.

About 7:05 p.m., a green carpet (BSU's colors) was rolled out to the center of the rink to blunt the glassy finish of the recently zambonied playing surface. The bright lights dimmed. A spotlight shown at center ice illuminating the Cedar Island Drum out of Cass Lake, Leech Lake, (David Northbird) who performed a flag song. What seemed like fireworks and smoke poured from the edge of the ice. The BSU Beavers were entering the rink followed by their opponents. As the announcer introduced the players, each skated to their respective "blue-lines" near center ice.

The lights now up, the carpet again unfurled, a singer sang the national anthem. Now walking down the carpet was Red Lake Little Rock Representative, Robert "Charlie" Reynolds, White Earth Chairman Terrence "Terry" Tibbetts, and Leech Lake Secretary/Treasurer Arthur "Archie" LaRose. The three tribal leaders waved to the crowd as the announcer introduced them one by one. The announcer explained that the leaders of the Indian Nations would participate in a ceremonial puck-drop.

The Captains of each team skated to center ice and took a face-off position. Then Chairman Tibbetts, having been given a commemorative hockey puck, dropped it to the ice. The icemen gathered the puck quickly and returned it to its former holder as a souvenir.

After the tribal leaders exited the arena, the carpet was rolled up and the game began, a game that BSU was destined to win 4-2.

Following the game, Zach Whitecloud visited with fans in a post-game autograph session.

"2013 was the inaugural year that BSU and Sanford center honored American Indians of the area," said Cyrus Pansch, Director of Marketing and Sales, Sanford Center. "We were privileged that tribal leaders participate in the ceremonial puck-drop each year. It's our way of trying to bring people together and highlight the unique diversity and contributions that Minnesota's three largest reservations bring to the Bemidji area."

In addition, Sanford Center demonstrates it's welcome for the area's Tribal Peoples continuously by participating in "Bemidji's Ojibwe Language Project." (As does BSU) Each entrance/exit to the event center is posted with the words Boozhoo/Welcome and Miigwech/Thank You on each and every door. All restrooms in the building have signage in Ojibwe and English as well, Ininiwag/Men and Ikwewag/Women.

The event was sponsored by Leech Lake Gaming and Bemidji State University. Sanford Center is owned by the City of Bemidji and it is to the City's credit that Ojibwe/English signage is posted at all City owned public buildings.

The Beavers 4-2 rally past Michigan Tech on Friday night helped the first-place Beavers put some much-needed distance on the second-place Huskies in the Western Collegiate Hockey Association standings. Friday's win gives the Beavers some breathing room with just five games remaining in the regular season. The win could make things very difficult on the Huskies' ability to come back and take first place from the Beavers. Coming into the weekend, BSU was four points ahead of the Huskies for the league crown.

Zack Whitecloud is a member of The Dakota Band of the Sioux Valley Dakota Nation, Canadian First Nation. "He's a very good player," said season ticket holder David Harrington. "He plays as much or more than any freshman on the team. He is the field general when it comes time to bring the puck up the ice in a methodical way."

"I think he scored a goal on his first shot ever in the Beavers' first game of the year in October," Harrington said, "for sure he scored in the first period of play in that game.

Proud of his heritage, Whitecloud wants to inspire aboriginal youth. He was named a co-winner of the Manitoba Aboriginal Sports and Recreation Council athlete of the year award for 2014. 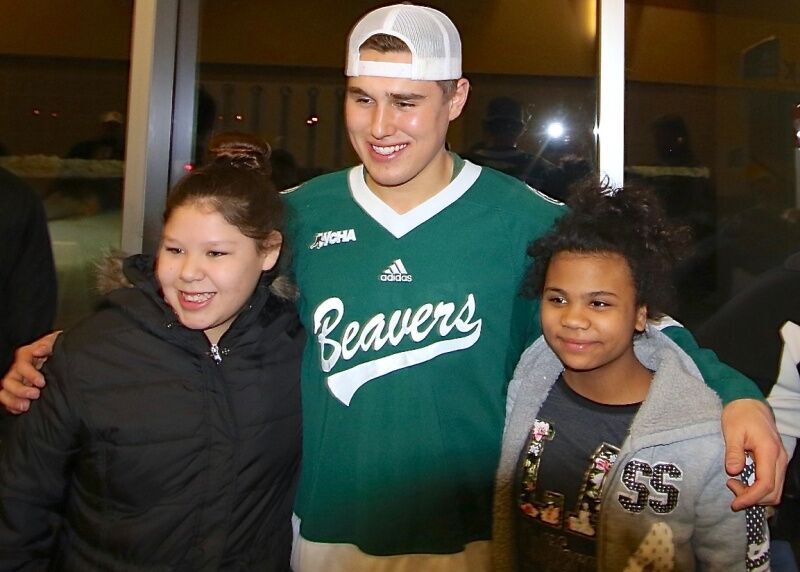 Whitecloud, listed at 6-foot-2, 202-pounds, is also a standout golfer. He has had an impact in the town of Virden off the ice. He's helped out in the community in various capacities, including Virden Minor Hockey and helping youngsters in school. Whitecloud sees his community work as a way of giving back to the next generation. Virden is a town in southwestern Manitoba. Oil was first discovered in 1951, and Virden has since come to be known as the "Oil Capital of Manitoba".

Below is a link to a nice recent story in the Pioneer about BSU Hockey player Zack Whitecloud.