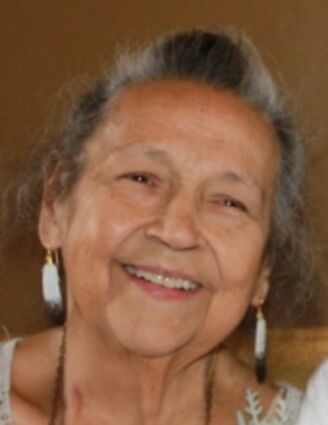 Memorial services will be at 2:00 pm Wednesday, January 25, 2017 at the Cease Family Funeral Home in Bemidji, MN with Pastor Bob Kelly officiating. Visitation will be one hour prior to the service. Interment will be at the Fort Snelling National Cemetery in Minneapolis on Friday.

Margaret was born July 5, 1939 in Winnebago, Nebraska, the daughter of Reuben and Alice (Skillings) Kitto and lived the first two years of her life on the Dakota Reservation in Santee, NE. In 1941, she moved to Minneapolis, MN with her father, mother, brother (Reuben Wambdi Kitto, Jr.) and sister (Laura Edith Morgan).

In 1956, she married Richard Joseph Butz, her high school sweetheart. In 1964, they moved to San Diego, CA. She raised four children, was actively involved in the PTA, Little League (Official Scorekeeper for 15 years), Pop Warner Mini Marchers (as a seamstress) and the American Indian Career Center where she helped pilot the first Infant Care Center for the State of California. She trained day care owners in the San Diego area and served on the board of directors for the San Diego Indian Health Clinic. She taught Adult Ceramics classes for San Diego Parks and Recreation for eleven years, worked for and retired from the South Bay Union School District (starting as a Teacher's Aide and ending as a Computer Tech in charge of a 25-station networked lab).

In 1991, she moved to Bemidji, MN where she remained involved with church, volunteered at Solway School for Principal Pat Welte assisting with the advanced reading program and sharing history and culture of her American Indian ancestry with students, sewed for Bemidji Community Theatre productions until she lost her eyesight, and then helped found the Vision Loss Support Group with Lois Foard and Karin Hanson in 2000 that continues today at Birch Haven.

She was born to be a "Grandma," spending weekends caring for abandoned and neglected children she met at the Indian Center, opening her home to countless servicemen over the course of 27 years for Thanksgiving dinners, taking in troubled teens in need of support, and watching her grandchildren and great-grandchildren after school until the day of her passing.

Always a true patriot, she raised and supported sons and grandsons who served their country, participating in operations at sea and in Iraq and Afghanistan.

She was preceded in death by her parents; her son, Richard Joseph Butz, Jr.; and her foster son, Ronnie Cosay.