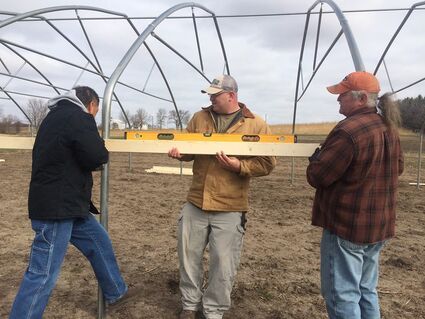 Darwin Summer, Eugene Standing Cloud and Michael Van Horn of Gitigaanike (RLLFI) work together to construct a high tunnel during a training at Wozupi Tribal Gardens in Prior Lake, Minnesota, in March 2016.

Over the last year, the Wozupi Tribal Gardens, owned and operated by the Shakopee Mdewakanton Sioux Community in Prior Lake, Minnesota, and Gitigaanike (Red Lake Local Foods Initiative, or RLLFI) in Red Lake, Minnesota, have engaged in a key peer-to-peer learning opportunity to further food sovereignty work in their respective communities. They were brought together through an effort by First Nations Development Institute (First Nations).

The two reservations are located at opposite ends of the state, with the Shakopee Mdewakanton Sioux Community (SMSC) located southwest of Minneapolis and St. Paul, and the Red Lake Nation in the northern part of the state, over a 500-mile round trip from SMSC.

While the two tribal communities are many miles apart, the distance was not apparent when talking to the folks at Wozupi and Gitigaanike (RLLFI). Both spoke well of each other and their dedication to the food sovereignty work in their communities.

Rebecca Yoshino serves as the Wozupi Tribal Gardens Director and Andy Grotberg is the Season Extension Specialist. The dedication to their work is apparent – as Wozupi is vast. It is made up of 13 acres of organic vegetable fields, 3.5 acres of organic fruit trees, chickens produce organic fresh eggs, and the beehives make honey that is sold at the Wozupi organic farmers' market in Shakopee and other farmers' markets in Minneapolis. Wozupi also grows seeds in its greenhouse for transplanting, and offers a custom transplant program where it "grows certified organic transplants from our farm for anyone who doesn't have a greenhouse or the space," said Yoshino. There is a children's garden and educational tours for the SMSC and surrounding communities to cultivate and inspire young ones to grow and enjoy fresh produce.

The impressive production set up at Wozupi made them the ideal partner for Gitigaanike (RLLFI), a tribal program under Red Lake Economic Development and Planning, which received funding from a First Nations Native Agriculture and Food Systems Initiative (NAFSI) grant, funded by the Otto Bremer Trust. The funding supported the solidification of the peer-to-peer learning relationship, on-site training on the best practices for food production, the evaluation of food and agriculture assets, and the implementation of a greenhouse and high tunnel.

"Encouraging peer-to-peer learning is an approach that First Nations has been incorporating into our programming to further asset-building and relationships. In this case, it's a great example of how the sharing of agricultural knowledge goes beyond location," said Raymond Foxworth, Ph.D., First Nations' Vice President of Grantmaking, Development and Communications.

Cherilyn Spears is a Red Lake tribal member and served as the Gitigaanike (RLLFI) project coordinator for 2016. Spears is interested in all aspects of food production and sees possibilities all around her. Her vision of a farm like Wozupi for her community is what drives her enthusiasm and dedication to her community.

The Oshkiimajiitahdah workforce supplied four dedicated workers: Marlon Black, David Defoe, Darryl Giizhick and Pete White. The staff and workforce crew traveled to Wozupi in the summer of 2016 to help put the plastic "skin" on the high tunnel. Later, in October, they traveled down to Wozupi to help harvest and clean vegetables.

The naming of the garden "Nitaawigitoon Gitigaan" by one of the Red Lake elders - as part of their cultural customs and traditions - gave the garden a spirit. The "raising of a garden is not unlike raising a child. It needs constant care and guidance in order to raise it to adulthood," said Manuel. "Nitaawigitoon Gitigaan" in the Ojibwe language means the "raising and/or taking care of the garden." "Gitigaanike" is the Ojibwe name for the Red Lake Local Foods Initiative (RLLFI), and translates "to making a garden," according to Manuel.

The pairing of the two tribal programs was an opportunity for the Gitigaanike (RLLFI) to learn from the Wozupi staff about conducting a food assessment, food safety measures, safety plans, gardening, planting in a greenhouse, how to put up a high tunnel, growing seedlings, and putting a drip irrigation system in place. Wozupi and the Gitigaanike (RLLFI) made reciprocal trips to see and experience each other's gardens and food-production facilities firsthand.

"I went up there twice to help with their greenhouse and their high tunnel. I liked the excitement and dedication of the Red Lake folks. They wanted to learn. They're dedicated to their programs. They were really appreciative. It was nice being up there," said Grotberg.

Both Wozupi and Gitigaanike (RLLFI) talked about how the different soils in their communities impacted the planting season, and how to plan and when to do things in order to prepare for it. Red Lake is farther north and colder, so its planting season is shorter and the soil is rich and "amazing," said Yoshino. Wozupi's planting season is longer with it being farther south, and its soil is thicker, heavier and has more clay in it.

The hands-on experience benefited both communities in ways they had not foreseen.

"For us, it was an enriching experience, to share what we have done here with other tribal communities. They (Gitigaanike (RLLFI) are just starting their food initiative work, and we offered support where we could. Our work – we're integrating it into a larger food movement in Indian Country. It's created a deeper, richer experience for me. We were really pleased to work with Red Lake."

"We don't have to start from scratch. They have the experience. We want to get set up to the capability that they are ... there's a friendship there, we can call on them and they can call on us," said Spears. 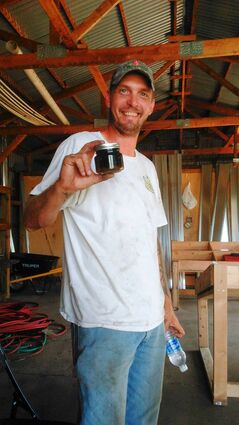 Andy Grotberg is the Season Extension Specialist with the Wozupi Tribal Gardens. He helped Gitigaanike (RLLFI) with its high-tunnel construction. He received Red Lake's world-renowned Miquam Bay maple syrup as gesture of appreciation.

The Red Lake Economic Development and Planning Department and the Gitigaanike (RLLFI) received a grant in 2015 from First Nations under the Native Agriculture and Food Systems Initiative (NAFSI), which was underwritten by the Shakopee Mdewakanton Sioux Community's Seeds of Native Health campaign. The project focused on improving nutrition in the Red Lake Reservation and stimulating the local food economy. The tribe educated community members on growing their own food, coordinating a pre-diabetes program, and enrolling participants into educational 16-week trainings to promote health.

Seeds of Native Health is a major philanthropic campaign to improve the nutrition of Native Americans across the country. The SMSC committed $5 million to the campaign, which was launched in March 2015. The SMSC has enlisted three nationally significant, strategic partners in the campaign: First Nations, the Notah Begay III Foundation, and the University of Minnesota.