Cooperative will bring Broadband network to over 1,030 locations 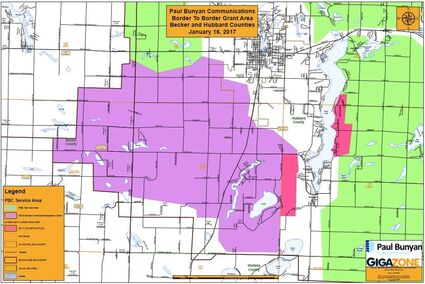 (Bemidji, MN) (January 16, 2017) –Paul Bunyan Communications has been awarded a Border to Border Broadband Grant from the state of Minnesota to expand its fiber optic services to portions of central Itasca County, southern Hubbard County, and a small portion of Becker County.

"We are excited to continue our expansion efforts to provide access to broadband Internet speeds to those without it in our region. Our cooperative has a long history of expanding our network to underserved areas but it has become increasingly challenging to go it alone without grant support. The State of Minnesota Border to Border Grant Program, Itasca County, and the Itasca Economic Development Corporation were instrumental in building community support and providing guidance through the grant application process to make this project a reality. These areas will not only get Broadband access, they will go from slow satellite or dial up Internet to speeds of up to a Gigabit per second and become part of one of the largest rural Gigabit networks in the country!," said Gary Johnson, Paul Bunyan Communications CEO/General Manager.

Paul Bunyan Communications expects to develop the expansion plans by early spring and will contact locations along the upcoming expansion routes shortly thereafter. Construction will start in the early summer and will be completed by June 30, 2019. Those in the region interested in keeping up to date on the project can look for updates on the Paul Bunyan website at http://paulbunyan.net. Those in Itasca County can also join the Paul Bunyan Communications Central Itasca Fiber Project Group on Facebook at https://www.facebook.com/groups/PBC.Itasca/

"This project will have an incredible impact on people's lives. Employees will be able to work from home, students will have access to educational resources, and seniors will be able to stay in their homes longer with telemedicine." added Steve Howard, Paul Bunyan Communications Information Technology and Development Manager. "We are impressed by the leadership shown by Itasca County in supporting this project. We know that government budgets are tight and the Itasca County leaders have continued to promote and support getting broadband infrastructure throughout their county." said Howard.

"I salute the hard work of our elected officials who championed the Border to Border Broadband Grant Program. I want to thank all of them and also the Office of Broadband Development that oversees the program. This is going to make a world of difference in so many ways to a lot of people right here in northern Minnesota!" said Johnson. 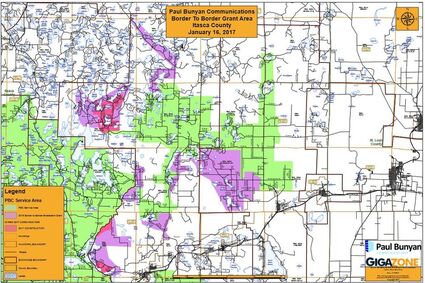 All of the cooperative's services will become available once the network is operational including GigaZone service options like unprecedented Broadband Internet speeds of up to 1000 Mbps – a Gigabit, PBTV Fusion and low cost unlimited local and long distance GigaZone voice service. There is no membership fee to join Paul Bunyan Communications, membership is included by subscribing to either local phone service or GigaZone Internet service.