Red Lake takes down Hillcrest Lutheran in the Super 60 Showcase

The Warriors fell behind early, but roared back to deal the Comets their first loss of the season 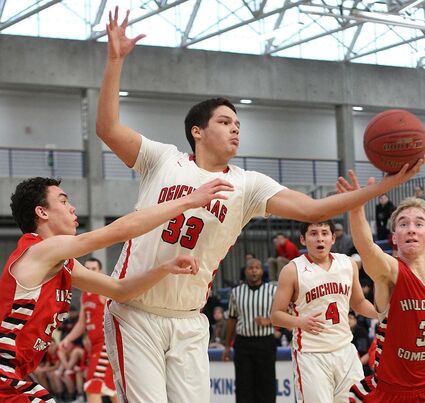 Many things have stuck with senior Rob McClain Jr. and Red Lake's basketball team over the years.

Whether it's the run-and-gun style rooted in the Warriors' program, their pride in the Ojibwe community or the warm ups jerseys the team sports with the No. 1 on the back in commemoration of Aaron White, coach Roger White's son who lost his battle with cancer last November, Red Lake's treasured its tradition on the court.

"We kept these jerseys from last year because he's always in our hearts whenever you step on the court you feel his presence," McClain said. "So we wear the No. 1 to represent him and represent our nation."

When Red Lake found itself trailing with only four points on the board in the first 10 minutes of the game, the Warriors never deviated from their high-temp offensive tradition, eventually breaking out to a 72-61 win over Hillcrest Lutheran Saturday afternoon in the Super 60 Showcase at the Lindbergh Center in Hopkins.

The Warriors, who are ranked second in Class 1A by MN Basketball News, kick-started their offense and put together a 17-3 run in the first half to pull ahead of the No. 7-1A Comets, a lead that they would not relinquish.

"Get in the gym, run, push and play tough-aggressive defense. Slowing down in basketball is something we don't do," McClain said.

McClain is averaging 17.7 points, 12.8 rebounds and 8.4 assists per game this season and has been a member of Red Lake's past three state tournament teams. His all-around ability binds together a Warriors lineup that features a variety of different skill sets and sizes.

At 5-foot-6 with stealthy speed, Jamie Cook can slip behind defenders unnoticed in transition and is equally lethal from the perimeter where he's converted 37 of 77 3-pointers.

McClain and 6-foot-6 senior Robert Beaulieu III patrol the glass for Red Lake and connected with Cook several times in transition after gathering a rebound against the Comets (8-1, 4-0).

McClain recently was accepted to Louisville for academics, which he said is his dream school to attend, although he'd be willing to take flight if given a D1 offer.

His cousin and coach White's daughter, Grace White, recently surpassed the 2,000 point milestone Friday night at Minneapolis Washburn where the boys team and the rest of the community attended.

"She's put a lot of hard work into it she makes me proud," White said. "(Basketball) brings our community together. They come out and travel together wherever we go and it's really nice to have that turnout."

Each year's been a unique experience for McClain, who hopes to lead Red Lake (12-1, 7-0) to a record four-straight state tournament appearances after a 10-year drought.

"It's something we don't want to leave, but time's coming for us. Over time you do get better but you also lose things. We're hoping to make it four and play for a state championship and go out on top," McClain said. 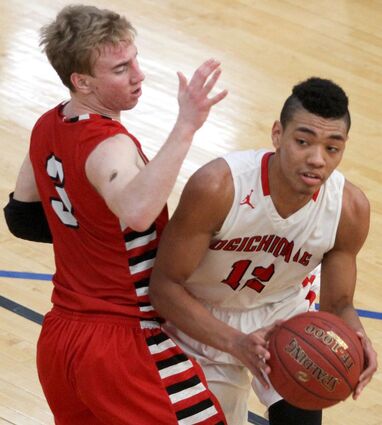 There's still some uncertainty in McClain's future basketball endeavors: whether or not he'll walk-on at Louisville, accept some of his previous DIII offers or receive a new offer with under three months left in the season, but for right now he remains firmly planted in Red Lake.

"Just being able to play with my friends I've been playing with since third grade is worth it," McClain said. "Having the heavy senior group and teaching the younger groups to continue tradition after we leave is huge."

Jamie Cook (18 points) and Rob McClain Jr. (15) paced Red Lake to a 72-61 win against Hillcrest Lutheran on Saturday afternoon in the Super 60 Showcase at the Lindbergh Center in Hopkins.