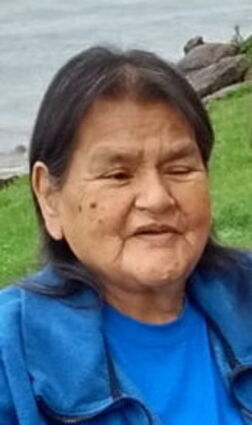 Valerie Janet Johnson, Waabishkii-Aandegookwe which means "White Crow" of Redby, Minnesota and the Makwa Odoodem (Bear Clan), age 64, entered the spirit world on January 2, 2017 at the Red Lake Hospital with her family by her side after losing her battle with cancer.

Valerie was born on the Red Lake Indian Reservation on July 10th, 1952 to Irene (Fairbanks) and Patrick Baptiste Smith. She grew up and attended school in Red Lake and Oklahoma. After her return to Red Lake she met and married Randolph Lee Johnson, Sr. on September 4, 1971. Together they raised six children. Throughout the years, she held a variety of jobs which included JMark, Redby Mill, Cedar Craft, Seven Clans Casino in Thief River Falls and the Redby Store. She enjoyed spending time with her family, going to the casino, traveling, rummaging, shopping and cooking, especially her delicious fry bread, not only for her family but for the community as well. Valerie also loved listening to music and her munchies after her smoke.

Valerie's care has been entrusted to Northern Peace Funeral Home of Walker. Online condolences for the family may be left at http://www.northernpeace.com