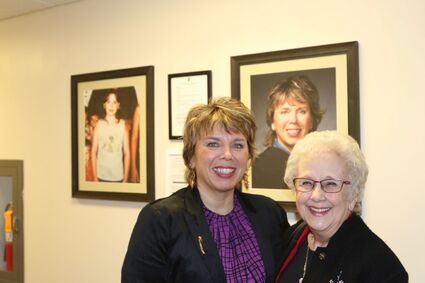 Minnesota Supreme Court Justice Anne McKeig, a graduate of Northland High School in Remer, with Dee Hillstrom, her former English teacher at Northland, in the hallway of the Cass County Courthouse.

Minnesota's newest Supreme Court Justice Anne McKeig stopped by the Cass County Courthouse during a trip to the area over the holidays. McKeig, who grew up on the other side of Leech Lake from the courthouse and graduated from Northland High School in Remer, was congratulated by a number of area residents, including Mrs. Dee Hillstrom, her former English teacher at Northland. Mrs. Hillstrom, who spoke at the gathering honoring McKeig, noted that in addition to being a great student McKeig participated in nearly every possible school sponsored activity. It was noted by District Court Judge David Harrington that Governor Dayton highlighted Anne's "life experiences," and "common sense wisdom" when announcing her appointment to the bench. Pointing out that Justice McKeig needs no GPS to find Walker or Sugar Point or Bena or Boy River, Harrington said, "Ann's background growing up here in Cass County along with her own internal compass has shaped who she is and has given her a sense of direction from which the entire state can benefit."

Judge Harrington related how McKeig said she was inspired back in 1995 when White Earth member Robert Blaeser became the first Native American to serve as a Minnesota District Court Judge. McKeig, who is also of White Earth descent, is now the first Native American to serve on the Minnesota Supreme Court and is believed to be the first woman of American Indian descent to serve on the highest court in any of the 50 states. Upon seeing Judge Blaeser being sworn in, McKeig thought "If he could do it, maybe I could too."

At the close of the gathering two portraits of Anne were revealed for permanent display in the hallway outside of courtroom 1. One of the portraits shows ten year old Anne McKeig from Federal Dam and the second is Anne's official Supreme Court portrait. Noting that the hallway is " too often filled by people, especially young people, who for some reason or another end up in court," Judge Harrington said that "we can all hope that Anne's story will be an inspiration to those who might seek to follow the path that Anne has opened."