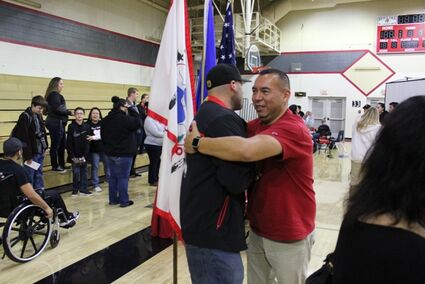 RED LAKE – At a special ceremony at Red Lake High School on Wednesday, November 9, 2016, Senior Grace White signed her letter of intent with the University of Denver to play in their Division 1 Basketball Program.

White is the first Red Lake athlete in any sport to commit, or even have the opportunity, to compete in NCAA Division 1 athletics.

"They say that signing day is an end as well as a beginning," Peggy Nelson, one of her teacher's, said. "Grace's beginning started at her grandma's court playing ball with her brother. But her real dedication to the game of basketball started in the 7th grade, when she became a player on the Red Lake Varsity team. Another factor was when Grace would watch in awe of her dad coach and that started her on the quest to become the best player she could be."

Nelson said the first time any talk of division 1 basketball was during Grace's first season. Her brother Aaron and her aunt Serena were hanging out with Grace one weekend and as usual the talk turned to basketball, and Aaron looked at Grace and said, "Grace, I think you can play D1 basketball." From that moment on Aaron and the rest of the family always talked about it being a reachable goal for her at a young age, and Grace never looked back.

"When Grace was recruited to play for the Minnesota Stars, which is an AAU team in Minneapolis, she was the only player from a single A school," Nelson went on. "Grace's teammates were all starters from 4A teams, schools like Hopkins, Shakopee and Eden Prairie. Nobody bothered to tell Grace all of the competition she was going to be up against, playing with a team of that caliber.

"Grace took this as a challenge, while on average scoring anywhere from 18-25 points per game. And while playing for the Stars, Grace was also playing on the Varsity team for Red Lake High School."

"Grace not only excelled on the basketball court," Peggy said. "But she is also a straight A student, she was chosen for the National Honor Society, student council, class president and homecoming queen...As you can see, Denver University is getting our best. But before Grace heads out, we are fortunate to have one more season to watch and cheer her on. So as they say signing day is an end and a beginning. We are so, so, so proud of you, Grace."

Grace thanked everyone for being there for her, and that it was also very emotional for her.

"I hope I set the example that all of you guys do something, make more history, get out there and do something you want to do," she said.

She added that it was a struggle growing up on the reservation, too, with several challenges all the time. But you have to get by all that.

"And get your education," she said. "Not only am I going to be playing basketball, but I'm getting my 4-year degree." 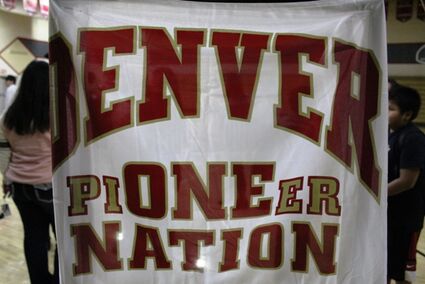 "We love you, Grace," someone shouted from the audience.

White is one of the greatest athletes to ever come out of Red Lake High School. She should hit the 2000 career points in her final year, and has the potential to break every record for the Warrior Basketball Programs-both boys and girls.

Although Denver is a long ways away, friends and fans can see her in action in North and South Dakota in years to come, too.

For more information on the University of Denver, follow this link: http://www.du.edu/index.html