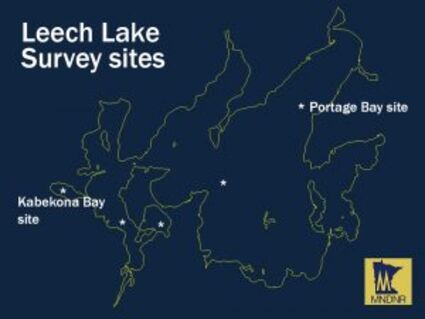 The Minnesota Department of Natural Resources has confirmed zebra mussels in their larval stage in two locations in Leech Lake in Cass County. The DNR has found no adult zebra mussels in the lake, but the locations and numbers of zebra mussel larvae, called veligers (VEL-uh-jers), indicate a reproducing population may be present. leech-lake-survey-map-2-1116

The DNR Fisheries section collected the samples as part of their Lake Survey Program, which proactively gathers and analyzes samples from the 11 largest lakes in Minnesota every year. Leech Lake is the third-largest lake in the state.

Portage Bay is within the Leech Lake Reservation; Kabekona Bay is not. The DNR will work with the Leech Lake Band of Ojibwe, the Leech Lake Association, property owners and local governments to conduct a broader search and discuss options.

The DNR recommends these steps for lake property owners:

Look on the posts, wheels and underwater support bars of docks and lifts, as well as any parts of boats, pontoons and rafts that may have been submerged in water for an extended period.

It's especially important to keep docks and boat lifts out of the water for at least 21 days before putting them into another body of water. This state law is central to the training DNR-permitted lake service provider businesses receive. Anyone transporting a dock or lift from the adjacent shoreline property to another location for storage or repair may need a permit, to help prevent the spread of aquatic invasive species.

Zebra mussels are an invasive (non-native) species that can compete with native species for food and habitat, cut the feet of swimmers, reduce the performance of boat motors, and cause expensive damage to water intake pipes. Less than two percent of Minnesota's 11,842 lakes are listed as infested with zebra mussels.

More information is available at http://www.mndnr.gov/AIS.