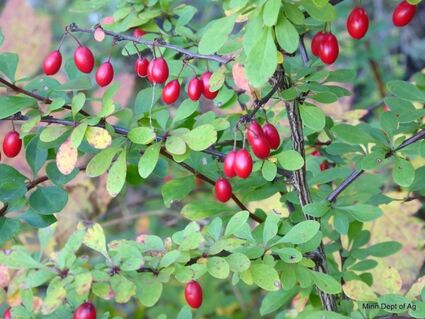 December's Weed of the Month is Japanese barberry (Berberis thunbergii). This species is a specially regulated plant on Minnesota's Noxious Weed list. Japanese barberry is a 3- 6 foot tall shrub which is covered with sharp spines. Its small, round leaves are borne in clusters along the stem. Small, yellow flowers in summer turn to reddish-orange, oblong berries which dangle from the leaf nodes. The landscaping cultivars have highly variable leaf coloration-including purple, green, gold, and lime-green. However, no matter their provenance, the escaped, naturalized plants will always have green leaves in summer which turn red or orange only in fall.

Japanese barberry was initially introduced to the U.S. as an ornamental and landscape plant. Since the 1980s, it has been found naturalizing in wooded areas. The shrubs will grow equally well in full sun or deep shade. Deer will not eat it due to its sharp spines, but birds ingest the fruit, thereby facilitating its spread. Barberries have the ability to change the soil chemistry beneath the plant, making the site more favorable for further infestation. Thanks to its ability to root from stems, Japanese barberry can form thick, impenetrable thickets.

Fall is a good time to look for and treat Japanese barberry in natural areas. Like a lot of invasive shrubs, it will hold onto its leaves in fall longer than native species. Management techniques include: 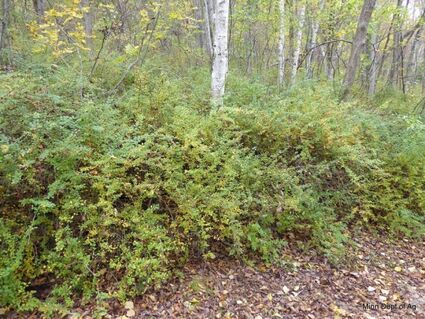 • Cutting, pulling, or digging small infestations. When disposing of plants, make sure the roots are exposed and will dry out, to prevent them from re-rooting. You can also bag or burn the removed plants.

• Prescribed fire can reduce large infestations and be used in conjunction with other management efforts. For information on prescribed fire, please visit the Minnesota Department of Natural Resources website (dnr.state.mn.us/forestry/fire/questions.html).

Next month we will explore the interesting connection between Japanese barberry, ticks, and Lyme disease.