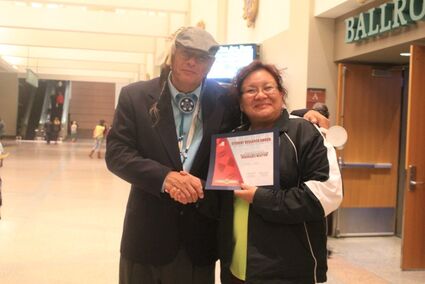 Anita received a 4th place research award out of 86 submissions to AISES for her research work in the summer of 2016 and poster presentation. This work was done under the tutelage of LLTC grad Sheila Northbird in which they compared the impacts of growth and distribution of wild ginger ( a traditional food and medicinal for Anishinaaabe people ) in blown down and undisturbed areas of the Chippewa National Forest . The frame of reference was that there are larger weather events occurring and that they are increasing with frequency . Open forest canopies impact wild ginger growth and distribution . A side discovery was the presence of an invasive worm (Amynthas agrestis ) which is called Asian Jumping Worm and had not been thought to have reached that far north . While all worms are not native to the northern woodlands biome , this one , along with earthworms , has the potential to cause erosion and run off issues as the worms destroy forest floor duff rapidly .

Anita plans on enrolling at Bemidji State in Environmental Science or the University of MN in Earth Systems Science and lives in Cass Lake , MN . Along with an honorarium , Anita was honored on stage at the AISES closing banquet for research scholars . 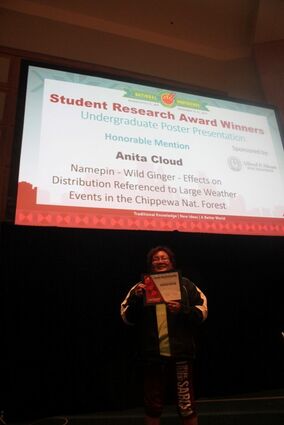 A highlight was meeting NASA astronaut , John Herrington , who served on the space station . Herrington was selected as a Mission Specialist for STS-113, the sixteenth Space Shuttle mission to the International Space Station. During the mission Herrington performed three spacewalks, totaling 19 hours and 55 minutes. Herrington signed and gave away a "fresh off the press " book for children about his work with NASA as an astronaut .