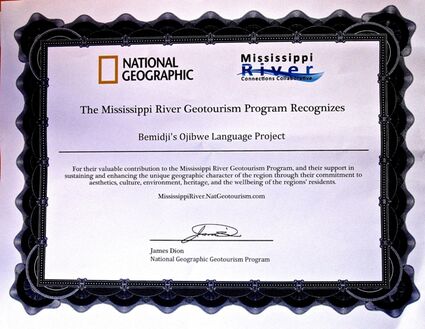 "The Mississippi River Geotourism Program Recognizes Bemidji's Ojibwe Language Project For their valuable contribution to the Mississippi River Geotourism Program, and their support in sustaining and enhancing the unique geographic character of the region through their commitments to aesthetics, Culture, environment, heritage, and the well-being of the regions' residents."

According to the submission to National Geographic by an unknown nominator: "More than 180 sites in the Bemidji area post bilingual signage in English and Ojibwe, an innovative idea for improving race relations. It helps American Indians (mostly Ojibwe) feel more welcomed and respected in the community, it helps the non-Indian learn a little bit more about the area before they arrived, it is a conversation starter between Indians and non-Indians, and tourists eat it up."

The nomination narrative continued; "Ojibwe/English signage varies widely from posting Ininiwag/Men and Ikwewag/Women on restroom doors, to Ojibwe names for animals in a pet store. Participants include Bemidji State University, City of Bemidji, Beltrami County, and Sanford Health Center, all schools in the Bemidji and Kelliher school districts, and many small businesses.

Bemidji, the First City on the Mississippi, is at the center of Minnesota's three largest Indian tribes. Bemidji is an Ojibwe word short for Bemijigamaag meaning lake with cross waters referring to the Mississippi flowing through the lake. Bemidji's Ojibwe Language Project was once a cover story in the national publication, Indian Country Today."

About The National Geographic Society's Geotourism

A new tourism model touted for Mississippi River features a website that shows tourists the experiences the mighty Mississippi can offer.

An article in the Minneapolis Star Tribune by Jim Anderson in April 2014 when the concept was first announced read; "An ambitious initiative aims to link together all 10 states bordering the river so that tourists will be able to enlist a one-stop website to plan trips themed around things like historic sites, parks or food. Created by the National Geographic Society, the project would feature interactive maps, smartphone apps and social media to help tourists discover the uniquely American riverway that slices through the heartland."

"Geotourism is a relatively new term for travel, wrote Anderson. 'It focuses on a destination's unique culture and history and intends to have visitors help enrich those qualities rather than turn the place into a typical tourist trap. The National Geographic Society has embraced the model and made it part of a global mission, said James Dion, sustainable tourism program manager with the National Geographic Society.' (It was Dion who signed the recognition certificate of the "Language Project.)

"While geotourism encourages treading lightly on the environment, it's also about experiences that are authentic to a place, rather than contrived. 'People don't travel to states, they travel to experiences,' Dion said.

"Backed by both the experience and marketing cachet of the National Geographic Society, the geotourism effort includes nearly a dozen projects across the country (and more around the world). The Mississippi River initiative is the largest geotourism project undertaken. 'Our goal is to inspire people to care about the planet,' Dion said.

"In 2008, the National Geographic Society and five federal agencies - the Agriculture and Interior departments, the National Park Service, Fish and Wildlife Service and Forest Service - entered into a formal agreement to adopt the principles of geotourism," said Anderson in the 2014 article.

"The idea was that National Geographic would put together a program to help draw tourism to the greater parts of our country recognizing that even through the depths of the Great Recession, tourism has remained a steady and growing industry.

"Americans overlook what the Mississippi River has to offer beyond a transportation system. The geotourism plan counters that view and gives tourists a chance to understand what the river is about - whether their interests are in museums, food or parks and wildlife refuges. And statistics show the bottom-line benefits of geotourism. A 2010 survey found that geotourists stay longer and spend more at their destinations when compared to non-geotourists.

"Bemidji's Ojibwe Language Project was created by two persons while serving with the Shared Vision Group, which was in turn created with support of Leech Lake, Red Lake and White Earth Nations, City of Bemidji, Beltrami County, ISD #31, BSU, Blandin, Chamber of Commerce, NW Minnesota Foundation, the Nielson Foundation, and others. The idea has snowballed across northern Minnesota and now Ojibwe signage is seen from Grand Marais to Detroit Lakes," the flyer reads.

"We hope to be a catalyst that encourages the Bemidji community to work together to expand social, economic, educational and leadership opportunity for people of all races. One of the strategies to achieve cultural understanding and respect is to encourage Bemidji businesses and organizations to add Ojibwe and English signage at their work sites," wrote Michael Meuers and Rachelle Houle who are spearheading this strategy. 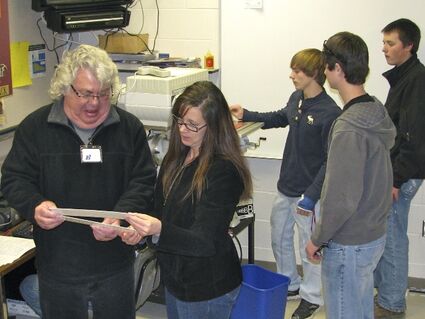 "Your participation could have a three-fold effect: a symbol of friendship and respect to American Indians; help non-Indians learn something about the area's first residents; and tourists 'just eat it up'. Please help us make Bemidji not only the home of the Sculpture Walk, Paul & Babe, and Bemidji in Bloom, but the home of Ojibwe/English Signage.

"We hope that one day...Boozhoo and miigwech...will be as synonymous with Bemidji as Aloha is with Hawaii."

"We don't know who nominated Bemidji's Ojibwe Language Project for this Recognition," sad Meuers, "but we are grateful on behalf of the organizations and businesses who are participating. Oh, and if we don't know about you, please let us know so we can get a photo of your signage on our Facebook site." https://www.facebook.com/Bemidjis-Ojibwe-Language-Project-185140938185759/