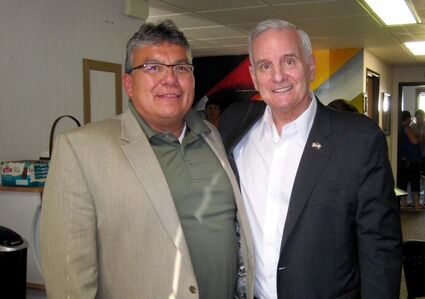 State Senator Rod Skoe, DFL of Clearbrook, is seeking reelection to the Senate Seat in District 2, and has been very helpful along with Congressman Collin Peterson as Loud seeks the State Rep seat for 2A.

Puposky resident Jerald "Jerry" Loud announced his candidacy for the Minnesota House of Representative 2A seat on February 12, 2016. Loud received the DFL endorsement for Senate District 2A at the Senate District 2 convention at the community center in Ogema, MN on March 19, 2016.

District 2A includes most of Beltrami County except the city of Bemidji, all of Clearwater and Lake of the Woods Counties and northern Hubbard County. It includes the cities of Baudette, Kelliher, Blackduck, Bagley, Clearbrook, Laporte, Akeley, and the entire Red Lake Nation.

A Red Lake member born and raised in Bemidji, Loud attended Bemidji area schools graduating in 1981. He attended Bemidji State University graduating with a Bachelors degree in Indian studies, 1999. Loud is also a ten-year veteran of the United States Navy.

Loud worked in corporate America for a decade with Novartis Pharmaceuticals, and has ten years working for the Red Lake Band of Chippewa in various positions. He currently is the Executive Director of the TANF (Temporary Assistance for Needy Families) program Director of Oshki-Maajitaadaa New Beginnings. In addition he spearheaded the Red Lake Green Step Nation.

Loud's legislative priorities include: Education, Economic Development, Technology, Veteran Affairs, and Environmental Issues. Loud, a ten-year veteran of the United States Navy says veteran's issues and bringing a Veterans Home to the Bemidji area will be a top priority with so many American Indian veterans in the Tribal Nations surrounding Bemidji. "It's a disgrace to not have a veterans home in the area," said Loud, "I will be there fighting for it. I have a passion for that and we'll get it done."

"I understand State and Federal procedures, and how the corporate environment works, I believe these are the qualities of a solid legislator and that is why I am asking for you vote on November 8, 2016, for the State Representative 2A seat."

Loud says he will bring a fresh voice to the Minnesota House because of his extensive educational and technical background. Check out Loud's official campaign website http://www.votejerryloud.com to learn more about his campaign, his positions on the issues, or how you can help a Red Laker go to St. Paul to represent Red Lake Nation.

A Fresh Voice for Minnesota's Future

If reelected, District 4 Beltrami County Commissioner Timothy A. "Tim" Sumner will be the Chairman of the Beltrami County Board of Commissioners and consequently have a much larger role in setting the county agenda. The Board Chairmanship alternates annually.

As a county Commissioner, Sumner works with County Administrator Mack, and Mack sees to it county staff carries out the Board's agenda. The County Sheriff, County Attorney, and County Auditor/Treasurer are all elected offices and do not answer to the County Board.

Sumner won his seat on the Beltrami County board in November 2012 over incumbent and fellow Red Lake member Quentin Fairbanks who served in that capacity for 12 years. Sumner and Fairbanks were the first American Indians to face each other in a non-tribal election in the history of Minnesota. Sumner was the youngest person (at 28) ever elected to the County Board.

Sumner is the third commissioner in a row from Red Lake. Fairbanks served three terms or 12 years. Fairbanks' predecessor Sandra King served only one term (1996-2000). King was the first American Indian in the state of Minnesota to be elected as a County Commissioner. Red Lakers have held this seat now for 20 years.

Sumner said if reelected, he will continue to work with both tribal, city and township officials for the betterment of all peoples. Sumner said it was important to treat everyone the same in the district both on and off the reservation. "I think it's important to have that government to government relationship, there are ways the county and tribe can work better together," he said.

Some of Tim's Issues

Drugs: "It's a serious issue and it's happening statewide and nationally. Locally, we can provide services through the Health and Human Services Department and collaborate with many different organizations that take it seriously," Sumner said. "Children are the ones that are hurting the most from this. I want to do what I can to push the importance of prevention and treatment, while working with parents."

Race Relations: Sumner said the subject is a very important one that he's tried to improve with his time as a commissioner. "Natives and non-natives want to learn from each other and support each other," Sumner said. "I would like to set up a race relation commission made up of officials from the county, the Red Lake Band, and the city of Bemidji to facilitate interaction and change policies that can help the community."

Tim is married to Rhiannon (Barrett) Sumner; they have four children - one son and three daughters. He grew up in Ponemah and graduated from Red Lake High School. He is looking forward to moving back to Ponemah with his family in the near future. Tim is an AmeriCorps Alumnus, and is a former officer of the Red Lake Political Education Committee. (RLPEC)

Thirty-two years of age, Tim comes from a family of eight. He has six sisters and one brother. His grandfather served on the Tribal Council at one time, and his Grandmother served on the School Board. "I come from a background of folks who believe in public service," said Sumner.

District 4 is a mix of Indian and non-Indian. It is in the northern half of the county, and represents about half the land in Minnesota's 3rd largest county. 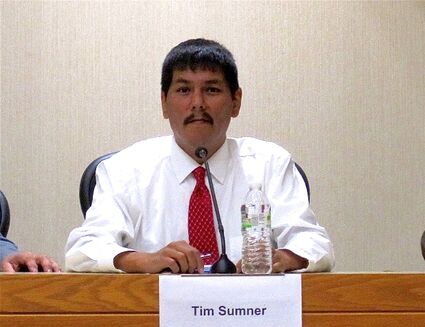 Tim Sumner at one of the candidate forums

Commissioner Sumner invites all to contact him by phone, email, and to check out his Facebook site.

Beltrami Board of Commissioners

Election day for all candidates for Federal, State, County and School Board is Tuesday November 8, 2016