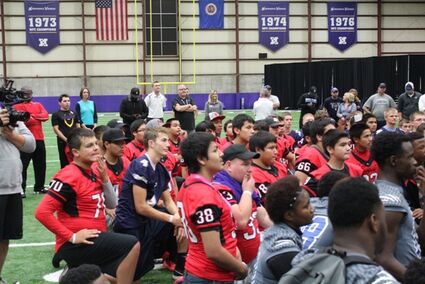 Gruden spoke to players and coaches from Minneapolis North, Como Park, Red Lake and Eden Valley-Watkins high schools, stressing the importance of "individual determination," a motto on a T-shirt that was presented to all attendees.

"We are all in charge of our own effort," said Gruden, who led the Buccaneers to victory in Super Bowl XXXVII in their only appearance in the title game.

Gruden also spoke on the importance of communication, hard work and perseverance. He presented $2,000 grants to each school that were provided by the DICK's Sporting Goods Foundation, and equipment such as footballs and tackling dummies. Gruden gave coaches gift cards and select players "Gruden's Grinder" T-shirts.

Despite having more wins than any coach in Tampa Bay's history (57-55 in regular season games), Gruden was fired after the 2008 season.

"I got fired from coaching in Tampa, and the only job I could get was coaching my son's high school team," Gruden said. "I was the line coach, and I realized real quick that these coaches don't get paid anything, and we don't have money for practice balls or pads or anything else, so then I started checking around, and the reality is coaches are getting less and less every year, the budget is getting less and less every year, and expectations are getting higher and higher."

Gruden guided players on how to run a slant route and worked with quarterbacks and receivers on silent communication that included the use of hand signals by a quarterback to inform receivers of the desired route.

It was clear that he has tremendous and authentic passion for supporting sports because of the values they instilled in him. 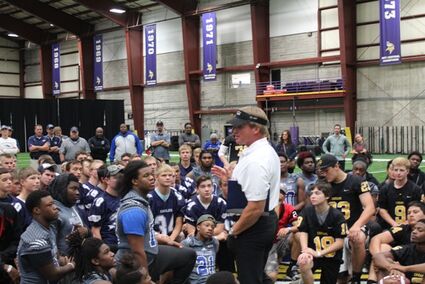 "If I didn't have sports, I wouldn't have learned those things," Gruden said. "The best teachers I've ever had were my coaches, and I don't want young kids to go without what I have."

Gruden is taking the opportunity to hold similar events in the lead up to Monday Night Football games.

He partnered with Vikings Youth Football Manager E.J. Henderson during the discussion, and they also were joined by Vikings Ring of Honor member Chuck Foreman during the presentation.

"If you can do anything for your local youth sports, high school football or girls basketball teams, we encourage it," Gruden said.