Congressman Collin Peterson is Among Celebrants 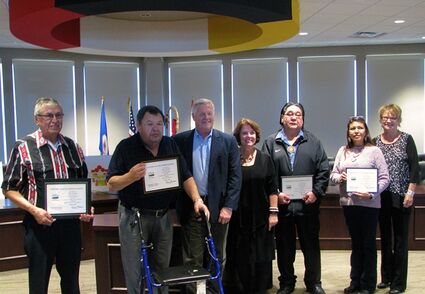 Certificates of Appreciation from USDA to the Red Lake Tribal Council.

USDA Representatives, along with Congressman Collin Peterson and Representatives from the offices of Senators Klobuchar and Franken participate in a Project Recognition Event and Press Conference at Red Lake at 1:00 pm on Thursday, October 6, 2016. They gathered will members of the Red Lake Tribal Council and key staff in the Council Chambers at the Red Lake Government Center.

"USDA and the Red Lake Band of Chippewa have partnered on numerous projects over the past several years to ensure the continued economic growth of the Red Lake Nation," said Colleen Landkamer, State Director of USDA Rural Development in an earlier press release. "These four projects will help to improve the health, safety and economic vitality for Red Lake well into the future."

In January, President Obama tapped Secretary Vilsack to lead an interagency task force focused on this specific challenge. Recent efforts have helped identify effective tools to reduce drug use and overdose, including evidence-based prevention programs, prescription drug monitoring, medication-assisted treatment and the overdose reversal drug naloxone. The funding for this treatment center is another example of the USDA's efforts to address the opioid epidemic.

The Red Lake Band will receive a $2,998,000 direct loan to increase the current renal dialysis center from five to 12 units, increasing their capacity to treat local residents. This project will provide job opportunities at the local hospital and decrease travel time for patients currently having to travel an hour or more to get to the next nearest facility.

The tribe will receive a $2.2 million direct loan to construct a new fire hall in the community of Ponemah. The new facility will offer state-of-the-art services including a training room, decontamination space, and enough space to house the Department's fleet of trucks under one roof. This new facility will help the community of Ponemah increase response times and better meet the needs of the local residents.

After 46 years, the current fire department in the Village of Red Lake has reached the end of its useful life and is need of many repairs that are no longer economically feasible to maintain. Red Lake Band will receive a $2.8 million direct loan to construct a new facility that will provide the resources necessary to serve the nearly 6,000 residents currently living on the reservation and serve as a back-up for the Ponemah fire department.

Eugene "Bugger" McArthur, Jobs & Community Development Facilitator, for Red Lake Nation acted as emcee and opened the celebration with a short background on the new facilities.

"On behalf of the RL Band of Chippewa Indians and our Tribal Council, it is an honor for me to welcome you all here today," said McArthur. "We are here today, to share with all, the latest collaboration between the Red Lake Nation and U.S. Department of Agriculture, Rural Development. It is with much pride, happiness, and determination that we announce Red Lake Nation has received approval for funding in the amount of almost $13 million to construct the following: Chemical Dependency Treatment Center; a Dialysis Center; and new Community Fire Halls for both Red Lake and Ponemah."

"It is also important to emphasize that most noteworthy in these efforts, is the fact that these expansions and new construction is not at the expense of the Tribe's general fund. Third party billings for services provided in these facilities and BIA lease agreements will subsidize the cost of the projects," said McArthur.

"But, at the end of the day, we must be mindful, that all the effort, the hard work, the dedication, and commitment put forward to bring these projects to fruition is all about the People of the Red Lake Nation, to address their needs, provide a homeland they can be proud of, and, with that, the hope to provide a better tomorrow for all," he said.

"Our current administration led by the honorable Chairman Seki, has provided great leadership, vision, support, and focus relative to the preparation of our Nation for the 21st century and providing essential community facilities in the areas of healthcare and public safety," noted McArthur introducing Seki.

Seki spoke first in his first language Ojibwe, as is his manner, then in his second language English. He thanked the USDA and tribal council. Seki said he is glad that people living in Red Lake will be able to get treatment locally. He also requested that Red Lake residents be hired to complete the projects, allowing money to circulate within the reservation

"Drug addiction is a disease, we don't raise opioids on this reservation, it comes in from outside. Drug addiction is everywhere, not just Red Lake," Seki said. "I want our people to get well."

"We are experiencing exciting times here at Red Lake," said McArthur when introducing Roman Stately. "We are thankful for the fact that Red Lake Nation has a very innovative and supportive Tribal Council that has the foresight to acknowledge the need to enhance the quality of services for all our people."

Stately was Red Lake's first fire chief back in 1972 and today he was all smiles. Back then he ran the fire department from a small garage. "It was so dark in there you could hardly see," Stately said. "The truck barely fit in the garage."

Stately says he is excited that Red Lake's firefighters will move to a badly needed new building, thanks to a direct loan from the US Department of Agriculture. "We don't have room for all of our equipment in the old fire hall, and the population has more than doubled since they built that facility," Stately said.

The fire hall to be constructed in Ponemah will include a decontamination space, a training room and space for the fire department's entire fleet of trucks. The new Red Lake facility will also serve as a back up for the Ponemah hall.

"I'm grateful to the USDA," said Stately, " he BIA condemned this building 15 years ago, it makes me so happy to see this finally coming to fruition."

McArthur then introduced Tribal Treasurer Annette Johnson and Tribal Secretary Donald Cook who spoke briefly to the group offering thanks to all involved. Red Lake member and DFL candidate for State Representative, District 5A Jerry Loud was also asked to say a few words.

"We would like to extend to our Congressional Delegation our most heart-felt appreciation and gratitude for all their support and assistance they have provided relative to these projects, and for their ongoing assistance and concern for all our initiatives," said McArthur when introducing Red Lake's Congressman Collin Peterson.

"I've been on the US Congress Agriculture Committee forever," said Peterson. "A lot of people think the Ag committee deals with farming and it does. But back when the democrats were in control of the house and I was Chairman of the committee, I insisted that the farm bills include rural development funds with a special emphasis on tribal nations. I'm proud of that, but things like this don't happen without collaboration with all who are here today."

"We are thankful for the support, cooperation, and great working relationship that we have with the USDA – Rural Development Program," sad McArthur when introducing the State Director Colleen Landkamer. "I want to acknowledge the support, trust, and respect they have displayed for the Red Lake Nation."

"It's about leadership and the people," began Landkamer. "USDA and the Red Lake Band of Chippewa have partnered on numerous projects over the past several years to ensure the continued economic growth of the Red Lake Nation. These four projects will help improve the health, safety and economic vitality for Red Lake well into the future."

Landkamer thanked Red Lake's leaders for their work in securing the direct loans, calling the day a celebration. "None of it happens without leadership," said Landkamer, "you all are the ones that make the difference." 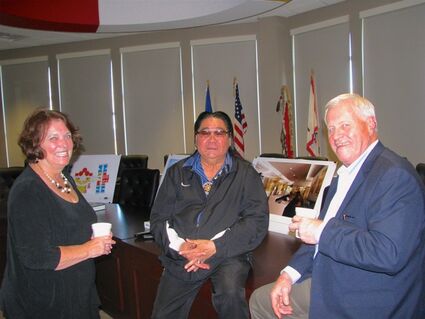 "A huge Chi-miigwech to Kathy," said McArthur when introducing Kathy Luepke, whose office is in Bemidji. "Without her support, persistence, knowledge, and professionalism, this would not be happening today. For all your assistance and hard work we are truly grateful."

"Congratulations to the Red Lake leadership," said Luepke, "these will be buildings to be proud of. Since 2009, USDA has significantly expanded its support for Tribes and Tribal communities, providing $3.1 billion in Rural Development programs and services. USDA has provided more than $553.5 million in loans, loan guarantees and grants to build or upgrade more than 300 Tribal facilities, and $55 million in loans to support Native-owned businesses and promote economic development in Tribal areas."