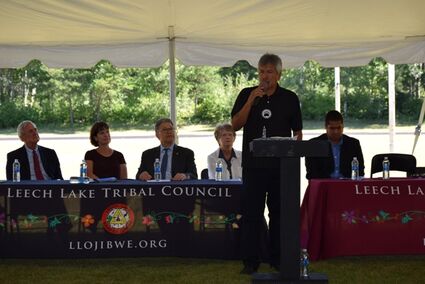 (Cass Lake, Minn) - August 24th, 2106 – The Leech Lake Band of Ojibwe (LLBO), School Board, and Superintendent, along with additional local, state, and federal leaders, celebrated the groundbreaking of the new, replacement Bug-O-Nay-Ge-Shig High School on Wednesday, August 24, 2016 with a ceremony and reception at the school complex. The new high school, located on the same property as the current school in Bena, Minnesota, is expected to be completed in July of 2017.

The Bureau of Indian Affairs (BIA) and LLBO are working cooperatively throughout the process and continue to work closely together through the completion of the replacement school. Currently, the school and LLBO are

reviewing space allocations of 44,283 square feet. Once approved, contractors will proceed with design, demolition, and construction.

Leech Lake Band of Ojibwe Chairman Faron Jackson, Sr., stated in his remarks at the ceremony, "Today's groundbreaking ceremony of the new Bug-O-Nay-Ge-Shig High School is an opportunity to honor and thank the

many people that have worked so hard through the years to bring us to this step, one day closer to a high school facility that we all can be proud of. This day would not have been possible without the hard work, dedication, sweat, and certainly tears of many individuals, administrations, school boards, students, teachers, parents, elders, and local, state, and federal elected and appointed officials, to name a few. Thank you. I can assure you that as Chairman of Leech Lake, it is one of my highest priorities to ensure that our students have the opportunity to

learn in safe environment, and I will work hard to build on the efforts of so many throughout the years. There is much excitement about this movement forward and I'm looking forward to an opportunity to continue to work with 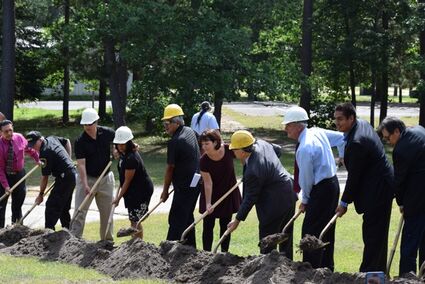 you to carry on the legacy of so many."

Bug-O-Nay-Ge-Shig Superintendent Mary Trapp stated, "The new school is an example of the success of our community coming together to help our students succeed. We are all looking forward to it."

Earlier this year, LLBO announced it was successful in long-pursued efforts to secure federal replacement funding for its high school from the United States Department of Interior's Bureau of Indian Affairs. The Bug-O-Nay-Ge-Shig High School's run-down conditions have been documented in the Huffington Post, The New York Times, and in a series of articles in the Minneapolis Star Tribune noting its rotten flooring, poor insulation, rodent infestation, broken heaters, and substandard and exposed wiring.