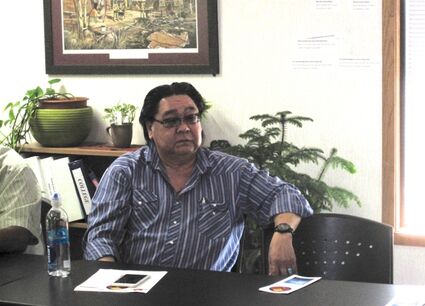 Members of the Red Lake Tribal Council along with elected officials from Leech Lake and White Earth met with two of the Governor's commissioners and the Governor himself over a two-day period at the offices of the Northwest Indian OIC in Bemidji.

Elected officials and key staff from the three tribal nations met on Tuesday, August 16 with Commissioners from the Department of Employment and Economic Development (DEED) and the Department of Human Services (DHS) and their staff to listen, learn, and share information on American Indian health disparities in Beltrami County.

On Wednesday, August 17, 2016, many of the same group met with Minnesota Governor Mark Dayton and his staff on the same issues. Dayton in addition spoke on strategies to close educational disparities and announced a new grant.

Meeting with Commissioners of DHS and DEED, Tuesday, August 16, 2016

The three largest tribes in northern Minnesota need to work together with their common border town of Bemidji, to address American Indian health disparities, in Beltrami County mostly, as part of its role as the economic and social Hub for the surrounding tribal communities, cities and counties. With privilege comes responsibility.

These are the result of complex interrelated social determinants Indians have faced for generations. High poverty and historical trauma continue to increase barriers to health care. Research shows discrimination can increase blood pressure, heart rate, stress, as well as undermine self-esteem. Far beyond discrimination Indians have endured a succession of traumatic events over generations.

Bemidji is located at the heart of Minnesota's Ojibwe country, home to the highest concentration, of Indians in Minnesota and its three largest tribes. Bemidji is the economic hub. Though in Beltrami County, it is central economically and socially to the neighboring counties of Cass, Mahnomen, Clearwater, Itasca and Hubbard. These counties are the poorest with the worst health conditions and educational attainment in Minnesota. All counties are the higher than the state average for unemployment. In addition, 60% of Beltrami County jail inmates are Indian.

Meeting with the Governor Wednesday, August 17, 2016

Tribal officials and staff gathered at the Northwest OIC about 12:15 pm on Wednesday to strategize the meeting in order to make the best use of the Governor's time. The governor was to arrive at 1:00 pm. Governor Dayton was initially scheduled to meet with the group for 40 minutes, but discussion was so broad and deep, that the Governor extended his visit first to 20 minutes until 2:00 pm, and then to 2:30, postponing a press conference scheduled for 1:40 pm in a separate room in the same building.

Dayton's meeting with tribal officials focused on strategies to close educational disparities in tribal communities surrounding Beltrami County, in addition to those disparities discussed with cabinet officials the day before. Dayton was touring the state speaking on education, and on this trip also attended meetings in Clearwater, Hubbard and Becker counties.

Representatives of the Minnesota Chippewa Tribe (MCT) joined staffs from the three tribal governments. Tuleah Palmer and Joe Day of the NWOIC again hosted the meeting.

A New Opportunity in Education

Discussion centered on equity as Dayton announced funding for a new grant for an adult learning program geared toward American Indians in the amount of $880,000. The grant will fund the Anishinaabe Basic Education Initiative, which is expected to help 150 American Indians in Minnesota attain an educational credential and access job training in the first year. This includes helping American Indian adults gain GED's or high school diploma equivalents.

The initial $880,000 grant, and an ongoing yearly $250,000 grant to follow, will be utilized by organizations such as the Northwest OIC and Red Lake's Oshki-Majitaadaa (New Beginnings) to address issues such as, only about 50 percent of Indian high school students attain a high school diploma.

"In this new road of educational opportunities, our goal is to create 'on ramps' for people to get an education and then to continue that education or join the workforce...with living wage jobs," said Palmer. "We're really looking at the equity from appropriations as a starting point to address a series of disparities that are facing the American Indian community in this region."

"The Anishinaabe Basic Education Initiative will help American Indians in Minnesota attain the education they need for good careers," Dayton said. "Providing all Minnesotans access to educational opportunities will help build an economy that works better for all Minnesotans."

Dayton pointed out to the press other disparities faced by Minnesota's American Indian communities discussed with tribal officials just prior. These included income levels, access and quality of health care, and jobs that may not be available because of educational issues. 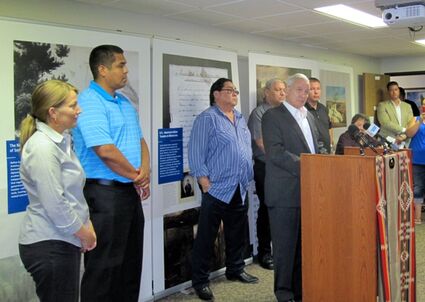 About 32 percent of Minnesota American Indians live in poverty and having a high school diploma or GED can increase the earning power of individuals by 36.5 percent, Dayton noted.

Once in the program, participants will have the opportunity to learn skills for both careers and college through a culturally related learning environment representing indigenous culture. "Accessing these initiatives will really be just as simple as coming in the door and being greeted in a safe place to be an American Indian," said Palmer.

"We're really honored to be hosting the governor and elected officials representing the three largest sovereign nations in northern Minnesota today," concluded Palmer. "We hope it's the beginning of good things to come from this government to government partnership and joining together to make a better community and a better nation."