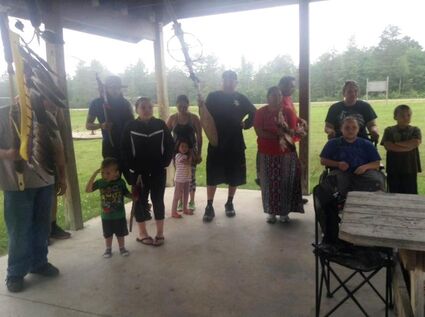 RED LAKE, MN - The Peace & Dignity Journey Runners ran through the Red Lake Indian Reservation on Sunday, June 26, 2016, stopping in the Little Rock Community where they were treated with a blessing and a meal.

This group is on a 6,000 mile journey from Alaska to Panama to promote saving the earth for future generations.

This run began May 1 in Chickaloon, Alaska. Runners are expected to reach Panama on Nov. 14 for a multi-day celebration.

Another group is heading north to Panama from Tierra del Fuego, Argentina, and a third group are running from the eastern part of the nation.

The three groups will meet at the Yaqui Nation in northern Mexico and travel together to Panama, according to a spokesman.

Runners alternate, one at a time, while the rest of the group members ride in two vans.

This year's journey is dedicated to seeds.

Peace and Dignity Journeys are spiritual runs that embody the prophecy of the Eagle and Condor. This prophecy mandates that at this time all Indigenous Peoples in the Western Hemisphere shall be reunited in a spiritual way in order to heal our nations so we can begin to work towards a better future for our children and generations to come. Through the Journeys, participant runners and supporters work to accomplish this goal by helping each other reconnect to their respective spiritual practices and traditions; by helping each other relearn our role in the world as Indigenous Peoples; and by reminding each other of our responsibilities to Mother Earth, Father Sky, our communities, and ourselves. 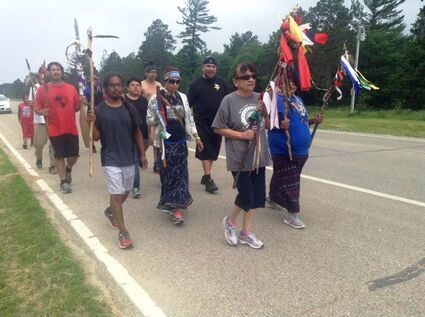 Peace and Dignity Journeys occur every four years and start with Indigenous runners on opposite ends of the continents (Chickaloon, Alaska and Tierra del Fuego, Argentina). They run for six months through hundreds of Indigenous communities where they participate in their respective spiritual practices and traditions; spark dialogue on the issue of peace and dignity for Indigenous Peoples; model their responsibility to Mother Earth, Father Sky, communities, and themselves; and receive the community's prayers. These prayers and conversations are then carried to proceeding communities until the runners reach the center of the hemisphere. When the runners meet at the Kuna Nation in Panama City, Panama, it will symbolize all Indigenous Peoples joining together in a spiritual way to manifest the prophecy of the Eagle and Condor.

On the Sunday run they ran from the River Road Casino in Thief River Falls, Minnesota. On Monday they will run to Bemidji.