February Weed of the Month: Poisonous Ornamental Plants to Avoid in Community Gardens 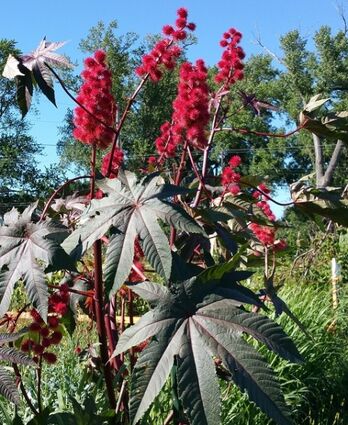 February's Weed of the Month is about the poisonous ornamental plants that may be found growing in Minnesota community gardens. Some poisonous plants commonly grown in gardens have specific parts which are safe to eat (like tomatoes or other nightshades), while other plants are entirely poisonous. We will focus on plants which are wholly poisonous. The most common of these in Minnesota are castor bean, jimsonweed or Datura, and foxglove.

Castor bean plant, or castor oil plant, (Ricinus communis) is native to Africa and occasionally grown for medicinal and ornamental purposes in Minnesota. It has become naturalized in tropical and subtropical regions throughout the world, such as California. In Minnesota, it is a robust annual, growing to heights of 6- 15 feet. It has large, colorful, palmate leaves and pink or red flowers found along its stalks, which become soft, spiky, fruit-containing balls. The seeds contain ricin, an incredibly toxic compound which can be deadly if ingested. Ricin also occurs in lesser amounts in tissue throughout the plant. The seeds of this plant are so poisonous, it is said that ingestion of a single seed can kill a child. For this reason, castor bean should not be planted in any area that might be accessed by children, such as a community garden.

Jimsonweed (Datura stramonium) is an annual ornamental plant in the Nightshade family occasionally found growing in Minnesota. It grows to a height of two to four feet and has long, trumpet-shaped, white to lavender blooms which extend above the leaf canopy, and distinctive, spiky, ball-shaped fruit. All parts of this plant, including the seeds, contain alkaloids which are toxic when ingested. If the plant were to go to seed, it could spread seedlings around a garden, which could then become intermixed with crops and accidentally ingested. Jimsonweed historically has been used as a recreational drug, occasionally resulting in overdose and death. The potential for accidental or intentional poisoning is high enough that it is advisable to prohibit these plants from growing in a garden alongside edible crops. 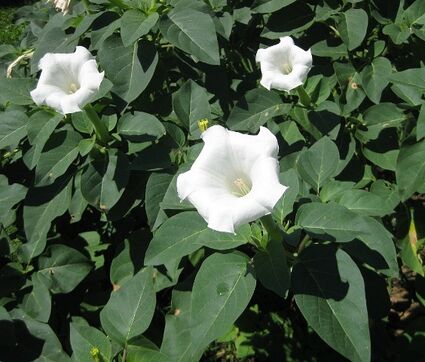 Foxglove (Digitalis purpurea) is a popular biennial ornamental plant. The foliage begins as a basal rosette in the first year. In the second year, it sends up long stalks which grow up to five feet tall and are lined with trumpet-shaped flowers. Many varieties are available, with flower colors ranging from white to pink to yellow. It is commonly grown to attract pollinators like bumblebees and hummingbirds. The entire plant is extremely toxic. Intentional ingestion can occur by individuals seeking medicinal folk-remedies and accidental ingestion by confusing foxglove with other edible herbs or by curious children. Foxglove is also prolific self-seeder and can become an aggressive invasive weed.

The best way to prevent issues with these plants is not to plant them in the first place, or strictly limit them. These plants, and all poisonous plants, should be prohibited from any community garden. They should not be planted anywhere where children might encounter them or close to any edible crops. Please contact Minnesota Poison Control with any concerns about potential human poisoning at 800-222-1222, poisonhelp@hcmed.org, or http://www.mnpoison.org [ http://www.mnpoison.org/