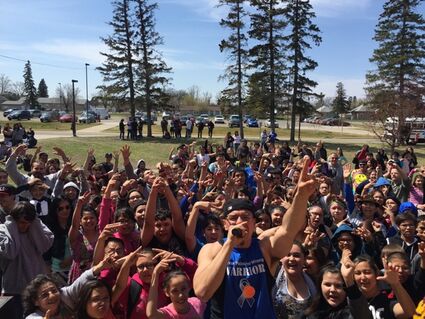 Thomas C. Barrett, whose Ojibwe name is Animiikii Aanakwad (Thunder Cloud), is 26 years old and has lived on the Red Lake reservation his whole life. He graduated from Red Lake High in 2007 and went on to receive an AA Degree from Bemidji State University. He played college basketball at Fergus Falls Community College and at the University of Minnesota-Morris.

Barrett is a survivor of the Red Lake High School Shooting that took place on March 21st 2005. He was a sophomore and was in the last classroom that was entered by the shooter who he considered a friend. Barrett lost his girlfriend Chanelle Rosebear and his close friend Alicia White during the tragedy. He has a memorial tattoo of Alicia on his left leg.

Barrett was an active alcoholic for six years and a drug addict for four years until he attained sobriety in late 2013. Over the last two years, Thomas has changed his life-style by walking the red road of sobriety while learning his Ojibwe culture. He credits family, culture, and Hip-Hop music for helping him overcome his addictions to drugs and alcohol.

Barrett has worked for his tribe as a youth activities coordinator along with in the community jobs including fitness trainer, youth advocate, Constitution reform advocate, Employment specialist, and basketball coach. He has run for school board twice losing by small margins and plans to run again in 2016. He plans on continuing his studies working toward a degree in Political Science and Indian Studies and continue working for his tribe.

Of late he has been a keynote speaker for Native American Youth and gives motivational speeches with a presentation entitled; "The Art of Expression" in much of Ojibwe country.

Barrett aka Thomas X is an independent Hip-Hop artist

Barrett began rapping in his later teenage years and eventually joined a local rap group known as "100 Souls" in 2010. In his early years as a Hip-Hop artist, Barrett used rapping as a way to vent and release his frustrations. In time, he realized that he wanted to deliver a positive message with his music.

As a rap artist Barrett hopes to help instill pride in the Red Lake people with an effort to combine modern day Red Lake culture, history, and the Ojibwe language in his music.

He considers himself part of a generation of kids that love hip-hop music. Barrett uses hip-hop as a tool to teach youth about their true identity as Anishinaabe people. Along with his rap crew Rez Rap, he has opened up for national acts like; Machine Gun Kelly, Tech N9ne, Yelawolf, Brother Ali, and A Tribe Called Red.

Barrett will be featured in a recent music documentary about Native Hip Hop covered by VICE Media. His song "Can You Hear Me," a song about Red Lake, is used as a warm up song during varsity basketball games, has been used for Red Lake MMA fighters as their entrance music, for tribal campaign ads, and has captured attention of people of all ages in Red Lake.

Barrett is one of the organizers of the Motherland Block Party, a one-day hip-hop festival that brought in 400 people for the first event. The first of its kind in Red Lake, it drew people from all over the reservation to the under-utilized Westend Park to enjoy hip hop music, basketball tournaments, kids games, food and drink vendors, and live comedy and magic. The event was independently created and promoted, and planners hope to make it an annual event. 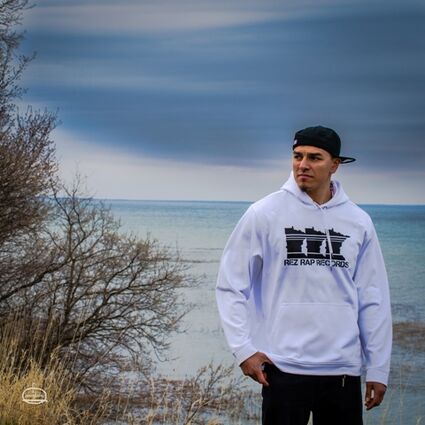 Thomas Barrett on the shores of Red Lake

Thomas X has released two solo projects; "The Stixtape" and his most recent project "Have A Good Day". His local approach appeals to those of like minds in the community with his use of Red Lake history and modern-day culture in his lyrics. He received major community support with his song/music video "Can You Hear Me" which is a song about the Red Lake Nation. In this song, he raps about reservation life-style, the neighborhoods in Red Lake, and he even kicks a flow in the Ojibwe language. Barrett as Thomas X promotes Native Pride in his music.

"I want to use Hip-Hop as a tool to educate Native youth about pride, culture, and identity." – Thomas X

"Can you hear me" https://www.youtube.com/watch?v=AbZaL65SDRw