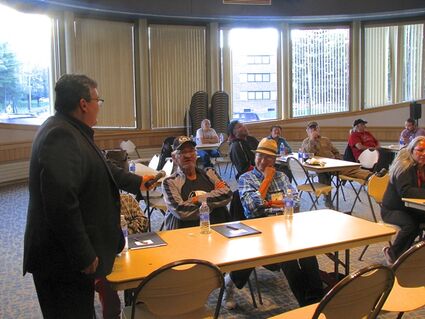 CRC Chairman Jerry Loud opened the meeting by giving a short synopsis on the history of Red Lake's Constitutions and Reform.

Red Lake members living in the Bemidji area gathered at the American Indian Resource Center (AIRC) on campus at Bemidji State University on Monday, September 15, 2014, from 5:30 to 8:30 p.m.

The meeting at Bemidji was one leg of the second round of informational meetings conducted by the Red Lake Constitutional Reform Committee (CRC) in order to seek input and feedback from the membership regarding Constitutional Reform. Meetings are held in Duluth and the Twin Cites in addition to the four reservation communities.

The AIRC seems and appropriate place to hold such a meeting. Upon entering the AIRC one is surrounded by an environment steeped in cultural heritage and tradition – a gathering place that honors the past and helps shape the future.

Near the door of the meeting room is a bilingual sign that reads "Mawanji'idii-wigamig" or "Gathering Place." Large portraits of local American Indian leaders and personalities cover two sides of the circular room with the vaulted ceiling reminiscent of a Round House. High on the ceiling fly 13 flags, banners representing Minnesota's 11 tribal nations flanked by the Minnesota flag to the right and the stars and stripes to the left.

Upon registration, each participant received a folder with information about the Constitutional Reform Initiative. A copy of the current Constitution was among the items in the folder along with background information - for a soon to be presentation - on issues related to the removal of Secretary of Interior Approval Clause in the Constitution.

One sheet had the main questions of the evening:

• How should we define tribal enrollment and citizenship in the future?

• What can our new constitution do to define enrollment and citizenship?

• What is a Red Lake Ojibwe citizen? How might we consider Ojibwe cultural ideas as we imagine ways of defining enrollment and citizenship?

After an invocation and light supper, CRC Chairman Jerry Loud opened the meeting by giving a short synopsis on the history of Red Lake's Constitutions and Reform. He welcomed all, thanked them for their participation and introduced the members of CRC. Loud then explained the agenda for the evening, much of which centered on "citizenship."

"Currently, the Red Lake Tribal Constitution resembles an Indian Reorganization Act-era (IRA) Constitution (almost 80 years ago), when the federal policy essentially required Indian tribes to adopt boilerplate, European-style governing "constitutions" in order to be fully acknowledged as sovereign, legal entities by the United States Government. In the past two decades," said Loud, "many Indian tribes have successfully undergone the extensive process to revise their constitutions to better allow them to seek progressive solutions to problems, pursue economic stability and revitalize their cultures, languages, and traditions."

Loud explained that it had been awhile since the tribe had revised its constitution, the last time being in 1958. "We are the Ojibwe, we are the free people of the pucker-toed people" said Loud, "part of the much larger Algonquin Nation. We need to protect our identity, our values, our spirituality. We are Anishinaabe Ojibwe and we must think about those seven future generations."

Who is a Red Lake Ojibwe?

Enrollment and citizenship emerged as important themes to be addressed in the Red Lake constitution when community members were surveyed, and tonight was no different. Culture, residence, and lineage versus blood were discussed. The way things stand; one could be a full-blood American Indian and not be an Indian according to the definitions dictated by the federal government. Red Lake Anishinaabeg have the power to define their own membership, but as all American Indians know, the issue is complex.

Background on the Blood Quantum Issue

A handout on the background of "blood quantum" was among the handouts in the folder.

Extensive discussion followed based on the following information:

• Historically, blood quantum was a way for the federal government to identify Indians, especially in relation to land sales of the allotment era, and for assimilation through boarding schools.

• Blood quantum first appears in the Red Lake census in 1920, but is not mentioned in either version of our constitutions.

Before the establishment of the US and long before Minnesota, Ojibwe people organized their families and communities through kinship, which was a system of lineal descent. Through the clan system, our ancestors organized their political and social worlds.

Things changed during the troubled era of the establishment of reservations, and new ways of thinking about citizenship or enrollment were introduced by the US. Federal officials sought ways to determine who was eligible for allotment of reservation land, or boarding school, and began using "blood quantum."

• Red Lake did not begin using blood quantum as a criterion for membership as early as some tribes.

• Census record show that those enrolled at Red Lake are descended from a small reservation population, and from ancestors with varying degrees of "blood quantum."

• No mention of tribal enrollment of blood quantum in first constitution of 1918, a time of fewer than 2000 people.

• At that time, if you were born on the reservation, you were a member.

• The first year that blood quantum appears in a tribal census was in 1929. The practice of using "blood quantum" to determine tribal enrollment dates from that time.

• Current enrollment practices rely on a base roll of tribal members in 1958.

• The base rolls of 1958 show members with a blood quantum of less than one quarter.

In the 1958 constitution defines membership with no mention of blood quantum.

Article III, Section I. The membership of the organization shall consist of:

A. All person of Red Lake Chippewa Indian blood who are duly enrolled members of the Band on the date this revised Constitution and Bylaws is approved.

B. The tribal council shall have the power to adopt ordinances subject to review of the Secretary of the Interior, or his duly authorized representative, governing loss of membership and future enrollment of members of the band.

In 1961, the tribal council amended the constitution to require one-quarter Red Lake Indian blood, challenging the "born on the reservation" practice of prior decades.

The Constitution Reform Initiative Committee wants to hear from members of each community in order to ensure that the drafting of a New Red Lake Constitution accurately reflects the voice of the Red Lake Nation.

The CRI Committee is a 13-member group of Red Lake Band members who represent a cross section of the Band membership. Each area of representation on the committee has been carefully selected by the Tribal Council to ensure the revised Constitution is crafted to mirror the importance of the Ojibwe language, culture, and way of life embraced by the Red Lake Band membership, while also realistically addressing the current and evolving needs of the tribe. The committee is responsible for and will work for a formal recommendation for a revised constitution for approval on a future Election Referendum Ballot

The Committee of 13 is made up of a Cultural advisor, legal advisor, and a representative from Duluth and two representatives from the four reservation communities and the Twin Cities. They include Eugene Stillday, Keith Lussier, Michael Beaulieu, Thomas Cain, Jr., Lorena Cook, Stephanie Cobenais, Sheldon Brown, Jerald Loud, Annette Johnson, Tharen Stillday, Pamela Johns, Brenda Child, and Pamela Pierce.

The Bush Foundation has approved a grant of $1,542,700 to Red Lake Band of Chippewa Indians to support constitutional reform outreach, education and meetings.

Over the past several years, the Tribe has been working closely with Native Nations Institute and the Bush Foundation to begin constitutional reform dialogue with the tribal leadership of the Red Lake Nation. Through several facilitated meetings and seminars, the Tribal Council recognized that the current constitution needed revisions, and in some ways had outgrown it. It was agreed that the document was a major roadblock to successful self-determination and effective governing due to many factors, but needed assistance with determining a way to address the constitution.

In order to begin the process, in 2012 a Constitutional Reform Initiative Committee (CRI) was formed and participants appointed.

The Red Lake Constitutional Reform Initiative's ("CRI") goal is to revise the tribe's current constitution to reflect who the people of Red Lake are as citizens, with the Ojibwe culture, language, customs, and collective priorities at the forefront of the way they govern themselves. The Initiative's purpose is to identify these collective priorities and transfer them into the Tribe's main governing document.

Community outreach, education, and engagement will be critical to the success of this Initiative, since it will be the tribal membership ultimately determining if the new and revised Red Lake tribal constitution will be adopted. 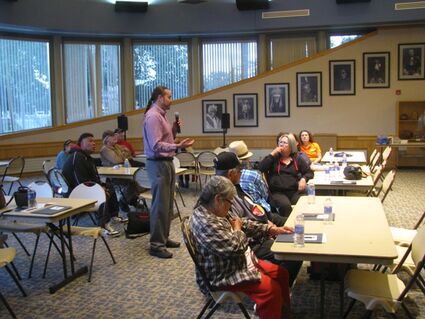 Our vision is to reaffirm respect and strengthen ideas of self-governance in the Red Lake Nation's Constitution; a document passed down to us from our ancestors in 1918 and later revised in 1958.

Learn more at the following links: