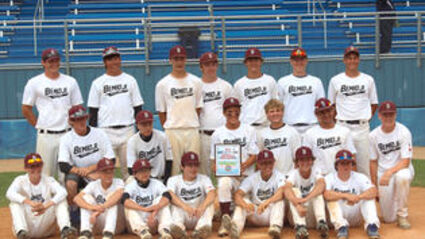 BRAINERD - Wednesday's itinerary for the Bemidji VFW baseball team began in the morning with a light workout. In the afternoon the coaches and players headed to Brainerd where they will spend the next few days playing in the state VFW tournament.

"This is a great experience for the kids and for myself and the other coaches," said Bemidji head coach Ryan Sander. "I'm going into this tournament wide-eyed and not knowing what to expect. Regardless of if you win or lose, playing in a state tournament is something you will always remember."

In his second year as the VFW coach, Sander has helped guide Bemidji to a 22-7 record and the District 9 championship. The goal of any team is to be playing its best at the end of the season and Bemidji has accomplished that goal.

"That is what we wanted to have happen," Sander said. "During the season there were some things we had to take care of but we did that and now we are playing as a team. I think we have a talented team and I think we could make some noise at state."

That hoped-for run will begin at 3 p.m. today against either Ranview or Becker. Ranview is the feeder program for Cretin-Derham Hall High School while Becker has been invited to the tournament as a host team.

That slot was available when Brainerd claimed the District 6 title and opted to accept that bid rather than entry as the host.

The difference for Brainerd comes in the seeding as the host team would have to play another game, in this case today's 10 a.m. contest against Ranview.

Today's other first-round contest pits Champlin against Austin. That winner will take on Grand Rapids at 3:30 p.m.

At 12:30 p.m. today Brainerd will face Mankato and the 1 p.m. showdown sees Alexandria taking on Marshall.

Bemidji will play only one game today. If it defeats Ranview or Becker it will advance to Friday's winner's bracket contest against the Alexandria-Marshall victor. A loss today, however, would drop the Vets into the elimination round and a 12:30 p.m. game on Friday.

The winner's bracket final will be 10 a.m. Saturday and the championship series of the double-elimination tourney will begin at 11 a.m. Sunday. If a second game is required it will be played at 1:30 p.m. Sunday.

On Monday the VFW played an exhibition doubleheader at Grand Rapids in an effort to keep both state-bound teams sharp.

"Everybody got in the games, all of our pitchers threw and we got our swings in against live pitching," Sander said. "We hit the ball well but at the end we made a couple of mistakes that cost us. But, the good news is that we got those mistakes out of the way in an exhibition game and now we can play our game at state.

"I am nervous about our two-week break but we did what we could to stay sharp," Sander continued. "We've tried our best to keep the team in tune and now it's up to the kids. Now we just have to go to Brainerd and play like we know we can."

Nate Larson will probably get the pitching nod in today's state opener. Joining him around the infield probably will be Zack Seitz at first, Brady Rutledge at second, Cam Boen at short, Caleb Carlson at third and Jared Young behind the plate.

The likely outfield finds Jake Amble in left, Otto Grimm in center and Alex English in right. Matt Morgan is expected to be the designated hitter.

The coach and the players are eager to begin but they know that nothing comes easily at this stage of the season.

"All of the teams at state are successful and will take full advantage of any mistakes," Sander said. "We don't fear anyone in the tournament and we're not intimidated by anybody but we do respect all of the teams. It is fun playing against the best teams in the state and the key now is to give the effort. Good things will happen if you play hard. We're not going to overlook anybody but we are ready to play and do our best."