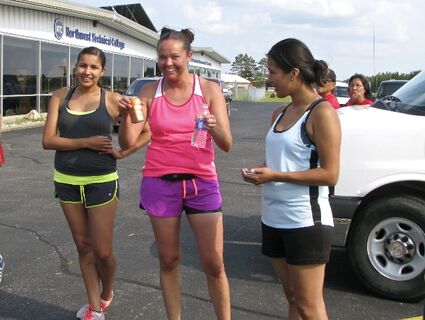 On the surface it kind of looks like a particular sort of marathon, longer than most at 322K (200 mile) and with mostly Indian participants, but it is much more. "The run is of historical, cultural and spiritual significance," said a Red Lake spiritual leader.

The annual Run for Health, Healing, and Sobriety began at the Red Lake Chemical Health Programs on Wednesday, July 30 and finished at the Mashkawizin powwow grounds at Fon du Lac for their 37th Annual Celebration of Sobriety powwow on Saturday, August 2.

The runners would carry two Eagle Staffs, the Sobriety Staff and the Suicide Awareness Staff. These staffs have been many places representing important issues for Indian Country.

According to Tom Barrett, Director of Red Lake Chemical Health programs, the Sobriety Staff has been on every run. "It's kept at Mashkawizin (Fond du Lac), we go pick it up before the run, and then leave it there at the end. The Suicide Awareness Staff has been many places around the five state area. It has come from Minneapolis and was left here after the "tragedy" by a spiritual elder."

"The number one killer of Indians is alcohol, but this is not just for Indians, this is for everyone, it's a prayer," said former Chairman Floyd Jourdain, Jr., to the participants. "Many suffer, especially families. While you're running, please say a prayer for those who suffer, for families, and for those that are healing."

"Running sends a message. That's our history as well as many other cultures," said Barrett. "We used to send runners to deliver a message to other communities. This is the same, the message is sobriety. But it is more, it's about health and it's about healing. So many suffer from alcohol and diabetes."

"And it's also a bit about suffering," Barrett went on. "It's not easy to run 200 miles or more over several days, some people get sore backs, or legs or feet. But there is camaraderie. The runners and support staff give of themselves to help others. It's emotional and spiritual in addition to the physical. People have been running or walking for centuries for a cause, sometimes-greater distances. A First Nations group ran from Canada to Mexico."

"You are running for your family and yourselves," said Gary Charwood, Leech Lake Band of Ojibwe Cultural Coordinator for Tribal Courts. "Put energy into your asemaa (tobacco). Asemaa gives us energy and support." Although Charwood is a Leech Lake member, his mother was from Red Lake. He was born and raised in Obaashiing.

"Carry the message," Charwood added. "It's not about us personally, it's not about glory, it's about sending a message. We're not supposed to suffer!"

"Being a part of it, one could feel the positive energy, and power of the eagle staff," said Charwood. "Stories were shared, it was a Spiritual Event. That's the reward, when my heart saddens, the group is like family, we have each other's back, and there is suddenly no room for negativity. We shut the world out for a time, and we come to the end...after four days of bonding...celebration is on the up."

"People give us support all along the run, it puts tears in your eyes seeing the pride and hope," said Charwood proudly. "Keeping sober is our thinking in the fullest definition, not only alcohol but drugs, but sobriety also means combatting all the negatives."

Charwood added that he is very determined to learn his language, Ojibwemowin. "I've lost many of my relatives from Obaashiing to alcohol and diabetes. It's important to realize their lives could have been different. On this run, people's lives get turned around. Not only those running, but it impacts those who are watching and even those listening."

The Run: On the Surface

After a brief ceremony, nearly a score of runners, including several youth and new runners began their run down Highway 89. It was a warm late July day with the temperature approaching 80. The runners were accompanied by a near equal number of support staff, who would use seven or eight vehicles to shuttle runners, provide water, and any other service the runners might need.

The teams run in what is known as a crow-hop relay. Each team or individual runner runs 3/10 of a mile, then is shuttled ahead of the four or five other teams, allowing time to rest while awaiting a turn to run again.

After an always-interesting run through Bemidji, slowing traffic a bit, many honking support as they pass, the runners reach Roosevelt Road on Bemidji's south side. Here they take a break, chatting and rehydrating. Suddenly a runner notices a highflying soaring bird approaching from the South. As the large bird nears it is recognized. Howa! It's Migizi! No one is surprised. Migizi is always expected for such ethereal events. The runners now rested and reenergized head east to destination Leech Lake powwow grounds where they camp for the night.

A shuttle back to Floodwood begins day four where teams from Fond du Lac join the runners and participate in the last leg of the run to Mashkawizin, near Sawyer, just south of Cloquet.

"It's fun, it's challenging, it's bonding," Barrett said. "Some go home, some camp, some do a short runs, some take a break and rejoin later, some go the whole run. When we stop to camp, we have a meal of soup and sandwiches prepared by Kevin Hart." (Director of Red Lake Traditional Foods Program)

All runners were welcome to participate in any and all of the run...no matter what nation, and several did join up for short sprints, some longer. Running through Bemidji, once or twice children...excited as if a parade, run along side the runners on the sidewalk for a block or two, still others cheer the runners on or honk horns of encouragement.

Gichi-Ma'iingan on the Sobriety Run 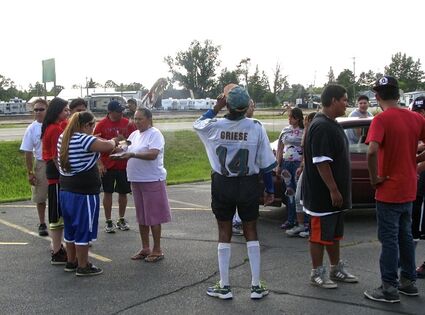 Long-time spiritual advisor for the run, Larry Stillday, recently passed, spoke of the sobriety (in 2013) as a prayer. "I've been out there doing invocations for the runners. The run is a prayer. The first day is run for those suffering, the second day is run for gratefulness...for positive things."

"A message is carried for all families," said Stillday. "The run has adopted this principle, it's more than about alcohol and drugs, it's about wellness and health in the broadest sense. When the run sends its energy into the inter-connective web, it is spiritually significant, we are dealing with the web of life. People who are in the city will feel it...they will feel it, and in the same manner you will feel humility. This is the teaching; Elders say the spirit is constantly in motion; the person running activates emotion, which goes into the rhythm of life. That's how connected we are, connected to all people, and all living things."