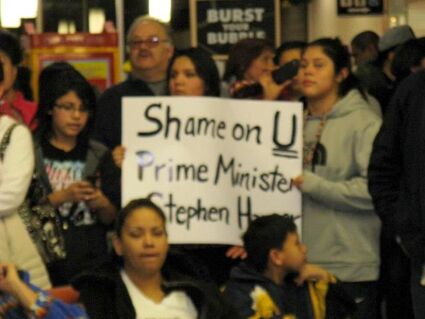 The aboriginal interpretive centre on an island in the middle of the Ottawa River where Theresa Spence is living out her hunger strike is not an unhappy place. There are fires and drumming and even the occasional round of song.

Native leaders have come from disparate parts of Canada to meet with the Attawapiskat chief who has said she will fast until the federal government gives in to her demand for a meeting among first nations, Prime Minister Stephen Harper and a representative of the Crown.

Ms. Spence wants to discuss the treaty that was signed in the first decade of the last century that covered a broad swath of Northern Ontario, including her own impoverished reserve. It promised money, education and health care in exchange for sharing the land.

Ms. Spence, like the descendants of the signatories of similar treaties across the country, says Canada is no longer living up to its part of the bargain.

So, two weeks ago, after listening to other chiefs at a national gathering complain about the problems affecting their people, the 49-year-old mother of five girls embarked on a hunger strike, consuming only water, fish broth and medicinal tea.

“I am fine right now,” Ms. Spence said in an interview with The Globe and Mail. After taking part in an early-morning smudging ceremony, she had a cup of medicinal tea prepared for her by a young first-nations man who is one of many people helping her in her fast.

It was coincidental, she said, that her personal crusade began about the same time as first nations across Canada embarked on a widespread and prolonged series of demonstrations under the banner of “Idle No More.” Those actions were also aimed at the Conservative government – specifically at a number of bills that will have a direct effect on aboriginal communities.

But Ms. Spence has emerged as a movement hero and has had plenty of support from people such as Saulteaux actor Adam Beach, who stopped by over Christmas. And, on Boxing Day, she met with Liberal leadership candidate Justin Trudeau. Her daughters and her partner, Clayton Kennedy, are also in Ottawa this week, and the atmosphere in the log-walled compound on Victoria Island is celebratory.

John Duncan, the federal minister of aboriginal affairs, wrote to Ms. Spence on Christmas Day to urge her to give up her hunger strike and to reiterate his own offer to meet with her. She rebuffed his overtures.

“I didn’t ask for Minister Duncan,” she said. “And I have dealt with him before. When I observe him, he doesn’t have a mind of his own because, before he would answer a question, he would always look at his people. He’s not the Prime Minister.”

Her demand, she said, is a meeting with Mr. Harper and the representative of the Crown, presumably Governor-General David Johnston.

“They are partners of the treaties,” Ms. Spence said. “First nations have been acting in good faith, honouring the relationships in our treaties. But it’s time to sit down with [the government and the Crown] and have a talk. I don’t know why they are so afraid to come and meet.”

The Assembly of First Nations organized a gathering between Mr. Harper and chiefs from across Canada last January, which Ms. Spence attended. But that was not the meeting that is required, she said. “It was just the Prime Minister making a show of it. But the Crown has to come to our table, too,” she said, “and this meeting has to be not just one day, it has to be at least a week or two weeks.”

Mr. Harper is unlikely to give in to a hunger strike, which could be interpreted as a form of blackmail. But Ms. Spence said she is in it for the long haul and is still prepared to die if her demand is not met. “As we speak,” she said, “our people are suffering with the system that we have been living in for the past 100 years.”

Meanwhile, disruptions are continuing across Canada. Boxing Day round dances were organized in shopping malls, and a blockade of a CN rail track in southwestern Ontario continued into its sixth day.

In downtown Vancouver, dozens of supporters disrupted Boxing Day traffic as they marched through the streets in solidarity. Police closed sections of Granville and Georgia Streets and directed traffic as the group wound through the downtown core, banging drums, waving flags, chanting and holding up signs reading, “Assimilate us no more” and “Honour the treaties, stop C-45.” At the intersection of Robson and Burrard Streets, the supporters formed a large circle, stalling traffic for about 15 minutes.

The Idle No More movement has been overwhelming, Ms. Spence said. “The youth know what’s going on and they feel the pain and they don’t want to live like that any more. So they are standing up. And they are backing up their chiefs. And the chiefs need to go forward with their people and sit down with the government and the Crown.”

Some, like Bill Erasmus, the National Chief of the Dene, have staged their own short-term hunger strikes in support of Ms. Spence. 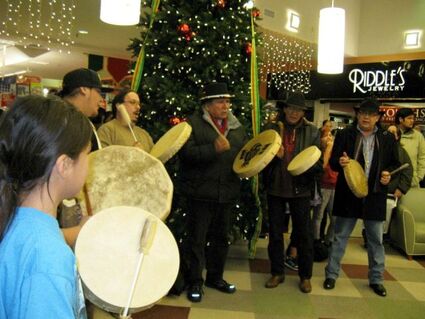 But, as far as the federal legislation goes, Mr. Erasmus says governments “don’t have the right to, they don’t have the power to” enact laws affecting first nations, which he says are independent from the rest of Canada. That attitude of defiance, growing in first nations across the country, suggests this could be a long year of conflict between the government and indigenous people.

For her part, Ms. Spence said she just wants the meeting she has demanded. “I am willing to do what I have to do,” she said. “If I have to take my last breath, I will. But it’s not going to stop there. There is a message out there from the youth who say, if the chief doesn’t make it, they will still make more noise. It’s not the end. My journey is going to continue.”