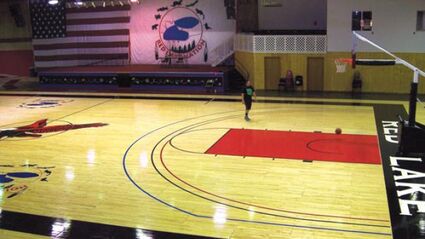 RED LAKE – In the mid-1970s, the Red Lake Band of Chippewa built the Humanities Center, including in it what is now a college-regulation-size basketball court.

“The floor is 30 years old and never had any maintenance at all,” said Ron Lussier, tribal activities director.

Now, with funding from tribal coffers and a grant from the Shakopee Mdewakanton Youth Initiative, the recreation center of the Humanities Building boasts a $30,000 sanding, varnishing, striping, lettering and decorating job. The logo at center court is a massive American eagle, the symbol of the Red Lake Nation College Migiziwag. FLR Sander of Perham took about one month to accomplish the work, Lussier said.

“The college is going to have a basketball team,” said Lussier.

“We’re really looking to start this in the fall of 2014,” said Red Lake Nation College President Dan King. “Until then, we want to host a tournament. We’re kind of at the development stage now of our team and recruitment.”

“Basketball is big in Indian Country,” said Lussier “We have one of the biggest all-Indian tournaments.”

Last winter, 24 teams competed, and Lussier expects a similar response for the Feb. 15-17 tournament in 2013.

“They come from coast to coast,” he said. “We (also) had a couple of teams from Canada.”

But the remodeling and refurbishment provides the community with much more than a venue for basketball, Lussier said. The area that formerly housed the Seven Clans Casino at Red Lake is now a workout center with treadmills, stationary bicycles, weights and elliptical trainers.

“Some people may come through the door and see only this gorgeous basketball court, or the state of the art fitness center, but it’s much more than that,” said Tribal Chairman Floyd Jourdain Jr. in a press release. “It’s about health, fitness, and above all, education.”

He said with the opening of the new Seven Clans Casino and Hotel on Minnesota Highway 89 south of the town of Red Lake, the Humanities Building can become the major community recreation center.

Lussier, Phillip Jourdain and Douglas Smith have achieved certification as official trainers. A smaller fitness room adapted especially for women who might want to train in privacy is also available, Lussier said.

Lussier said the tribe has used the main floor for the State of the Band Address, a Christmas concert, arts and crafts fair, health fair, women’s volleyball, high school basketball practice and skateboard on the concrete border surrounding the polished maple basketball court.

“Kids are here all the time. The gym is always open. We (Chemical Health Department) host a New Year’s Eve gathering here, too, every year,” Lussier said.

He said another sport starting up is a boxing club, currently managed by volunteers.

“There’s girls that participate (in boxing) too,” Lussier said.

The boxing area is run by Richard Clark, a former boxer who won national titles twice as a youngster, according to a press release. He works with people ages 8 to 31 and is looking forward to hosting competitive boxing tournaments.

Lussier said he plans to expand activities for young people. “It’s so important that youth have something to do on the Rez,” he said.