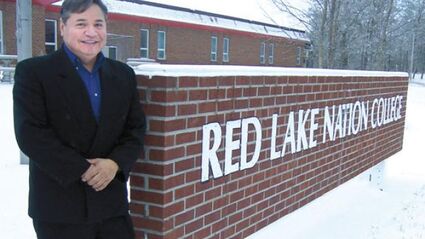 Dan King, president of Red Lake Nation College, grew up in a poor St. Paul, Minn., neighborhood. In 2006, he graduated from Harvard with a Master of Public Administration degree. Molly Miron | Special to the Pioneer

RED LAKE – Red Lake Nation College President Dan King didn’t grow up on the reservation. Nor did he experience any affluence in his early years.

“Everybody called it the Proj,” he said with a smile. “It kind of makes you humble. It was a multicultural community – Native Americans, blacks, whites, Mexicans, Hmong.”

His parents split when he was young. For most of her working years his mother was at the Metropolitan Wastewater Treatment Plant. His father lived in Red Lake, working as a commercial fisherman and security at the Red Lake Hospital.

King said his diverse connections and experiences have given him an ability to work with and appreciate a wide range of people. He also played hockey from ages 5 to high school, providing him acquaintance with a different cadre than those in the Proj.

He attended St. Paul Humboldt High School, whose team name is the Indians. He said he didn’t take offense at the mascot. “I liked it. We had cool uniforms with an Indian chief. People were respectful. No tomahawk chop.”

King said playing sports and enjoying good times were his focus in high school, but his grades were good. At some point, although peers and counselors advised against it, he decided he was going to college and was accepted at the University of St. Thomas.

“Scholarship boy definitely,” he said. “I just knew I didn’t like being poor and living in the projects.”

He said the doubts of friends and others that he belonged in college made him stubborn and determined to show the naysayers they were wrong.

“I did have to work extra hard to make it the first year,” King recalled. “I knew if I didn’t make it that first year, I’d be back in the projects.”

He was the first person on both sides of his family to graduate from college. He earned a business degree from St. Thomas in 1986.

As he was growing up, King returned to Red Lake occasionally. “I remember being curious,” he said.

During his college years, he spent summers as an intern for Land O Lakes. That worked into a full-time sales job when he graduated, but he said he “couldn’t get excited about selling a truckful of butter.”

Then his uncle told him the Red Lake Fisheries manager was going to retire and suggested King apply for the position. He was hired at age 26. He is now 49. He later worked for the Mille Lacs Grand Casinos Inc., but then returned to the fisheries. Meanwhile, he was elected to the Red Lake School Board and as tribal treasurer.

In the mid-2000s he was recruited by the Harvard Project on American Indian Economic Development, a one-year mid-career master’s program for people between ages 30 and 50. He graduated in 2006 with a Master of Public Administration degree.

“That was a life-changing experience,” King said. “I think I might be the first Red Lake member who graduated from Harvard.”

King had heart bypass surgery in 2009, another life milestone which gave him a desire, he said, to spend more time with his son, Alex King. That closeness was something he said he had missed during the years he traveled around to various jobs. He asked Alex where he would like to live. The response was Bemidji and Red Lake. King took a teaching position at the Red Lake Nation College and moved into the presidency in 2010. Alex is now a student at the college.

Building a new college campus, starting a basketball team, the Migizi, and earning full accreditation are King’s goals for the future.

He said Red Lake Nation College is designed to be an institution students can use as a jumping off point for a four-year degree at Bemidji State University or some other university.