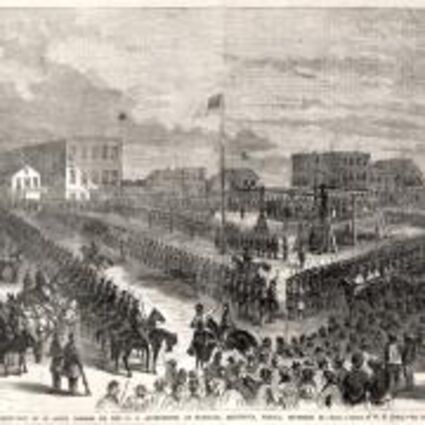 Wednesday marks a painful anniversary in Minnesota and national history. It’s the 150th year since 38 Dakota men were hanged in Mankato on Dec. 26, 1862, the largest mass execution in U.S. history.

There are many ways Minnesotans can learn about the hangings and what led to them, including an exhibit, “The U.S.-Dakota War of 1862” at the Minnesota History Center, which is extending its run through Sept. 8, 2013. Minnesotans are also encouraged to visit http://www.usdakotawar.org for a list of all initiatives, events and resources for commemorating and learning about the war. This web page, http://www.usdakotawar.org/history/war-aftermath/trials-hanging, gives a detailed account of the hangings.

In observance of the hangings, the Alexander Ramsey House in St. Paul will be closed Dec. 26, 2012. Ramsey was governor of Minnesota during the U.S.-Dakota War of 1862 and notoriously stated that “the Sioux Indians of Minnesota must be exterminated or driven forever beyond the borders of the state.”

2012 marks the 150th year since the U.S.-Dakota War was fought over six weeks in Southwestern Minnesota, resulting in hundreds dead and the Dakota exiled from their homeland. The war's causes began decades earlier and the impact of the war is still felt today. Throughout this year and beyond, the Minnesota Historical Society is offering many new ways to learn about the war, its causes and its aftermath. Members of the media are encouraged to visit http://www.usdakotawar.org/media-room for resources related to the war, including historical background, images and spokespeople.

Many projects and programs related to the U.S.-Dakota War of 1862 are made possible by the Legacy Amendment's Arts and Cultural Heritage Fund through the vote of Minnesotans on Nov. 4, 2008.

The Minnesota Historical Society is a non-profit educational and cultural institution established in 1849. The Society collects, preserves and tells the story of Minnesota’s past through museum exhibits, libraries and collections, historic sites, educational programs and book publishing. Using the power of history to transform lives, the Society preserves our past, shares our state’s stories and connects people with history.