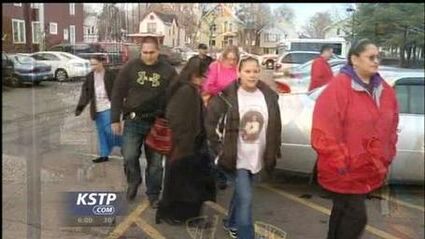 Survivors of the 2005 school shootings on the Red Lake Indian Reservation in Minnesota left for Connecticut on Wednesday to help comfort those grieving the killings at Sandy Hook Elementary School and repay the support Red Lake received from Columbine survivors.

Most members of the contingent belonged to the Red Lake High School Class of 2008. Now in their 20s, they were teens when a 16-year-old classmate killed his grandfather and grandfather's girlfriend and then drove to the school, where he killed five students, a teacher and a security guard before killing himself. Five others were wounded in the shooting spree.

Soon after, two survivors of the 1999 shootings at Columbine High School in Colorado traveled to the Ojibwe reservation in northern Minnesota with a kind of sympathy few others could demonstrate. They presented a plaque to Red Lake students that the delegation now plans to pass on to the students and teachers in Newtown with an added inscription for Sandy Hook.

"They understand. They've walked through this before," said Stephanie Hope Smith, who worked with other Rotary Club members to organize the trip.

Justin Jourdain, a 2008 graduate of Red Lake High School, was in the school during the March 21, 2005, shooting. He came up with the idea of going to Connecticut and said the visit from the Columbine survivors was helpful.

"It helped a lot, just knowing there are other people out there who understood what we were going through," Jourdain told The Pioneer of Bemidji Tuesday night before the group left.

The group planned to meet with school staff in Newtown on Thursday and attend students' holiday musical on Friday.

They're going as "a ministry of presence, just about being there and supporting," Smith said. Like the Columbine survivors who visited Red Lake, they plan to offer whatever support they can in hopes of bringing "a step of closure" to Newtown, with a message "that healing can come and will come," she said.

Exactly how they'll help hasn't been determined, Smith said, but they might be able to work behind the scenes to relieve the burden on school staff or community volunteers, perhaps giving them a chance to step away from the phones and catch their breath.

"They're very sensitive to the idea of not creating a burden," Smith said.