Woman lives with horrors of 2005 Red Lake shootings, brought back by new tragedy 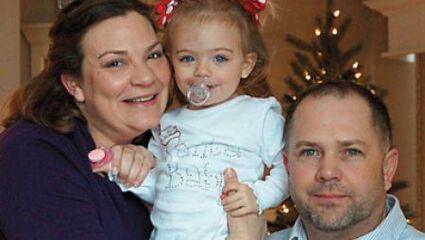 Missy Dodds was at a Twin Cities service station Friday when the first news bulletins out of Newtown, Conn., flashed around the world.

“I was flipping through my phone, and I saw it, and I started crying,” she said.

Dodds, 38, was a high school math teacher in Red Lake, Minn., on March 21, 2005, when a 16-year-old student burst through the glass window of her classroom and continued the killing he had started minutes before in the hallway.

Ninety seconds later, five of her students were dead, as was fellow teacher Neva Rogers, who had fled to Dodds’ room after Jeff Weise shot at her in the hallway.

“I know what those people in Connecticut have ahead of them,” Dodds said Monday. “There will be a lot of sleepless nights and nightmares. There will be pain, guilt and anger.”

Of the children who were in Sandy Hook Elementary School Friday morning, she said, “I know how scared they were.”

Dodds still lives in Bemidji, near the Red Lake Indian Reservation, but she has not worked as a teacher in the nearly eight years since the shootings.

She is in the Twin Cities tending to her children, a daughter nearly 2 and twins born prematurely three weeks ago. They are feeding well and growing, she said, and she looks forward to taking them home.

She is still in therapy.

“My trauma cup is full,” she said. “Anytime there’s anything stressful that happens to me, it really sets me off.”

She said she sees the sweet, innocent faces of girls and boys 6 and 7 years old on news reports, victims in this latest in a string of school shootings, and she can’t hold the lid on feelings that have plagued her since that day in 2005.

“There is survivor’s guilt, the ‘why wasn’t I shot?’ question,” she said. “And there are the children. The parents sent me their kids that day, and I didn’t send them back.”

‘He pointed the gun at me’

It was the last period of the day, a study hall, a little before 3 p.m.

“A student came banging on the door and told me another teacher had been shot,” Dodds said. “Then I heard gunshots. I turned the lights off and we all scooted over to the wall.

“Neva Rogers came running into my room. He had shot at her in the hallway. We were all scooted against the far wall.”

The shooter, Weise, tried to shoot out the lock on the classroom door. It held, Dodds said. But a panel of glass ran along the outer wall, and Weise shot that out — just as the shooter in Connecticut shot out a glass door to gain access to Sandy Hook Elementary on Friday.

“We were lined up against the wall, crouched on the floor,” Dodds said. “He started at the other end. … He pointed the gun at me, but he had no bullets left in that gun.

“Up against that wall, I thought, ‘This is what it feels like to die.’ I remember being just terrified. And I know how those little kids in Connecticut were, scooting against a wall, squeezing their legs and trying to get into a little ball.”

As Weise paused, student Jeff May lunged at him and stabbed him with a pencil, Dodds said. Weise took out another weapon and shot May in the face. (May survived, and he later was named by Readers Digest as the hero of the year.)

Weise went briefly to another room, shooting and wounding another student, but retreated to Dodds’ room when police began to arrive.

“That’s where he killed himself,” she said.

It brought the death total to 10. Weise had shot his grandfather, Daryl Lussier, 58, a Red Lake police officer, and Michelle Sigana, 32, his grandfather’s companion, before driving his grandfather’s police car to the high school, where he shot Derrick Brun, an unarmed security guard; teacher Rogers, and the five ninth-graders: Chase Lussier, Thurlene Stillday, Chanelle Rosebear, Alicia White and Dwayne Lewis.

Dodds spent five weeks in an in-patient therapy program for post traumatic stress in Arizona, “the place where a lot of the 9/11 victims had gone,” she said.

“Since then, it’s been a very long road of therapy, work, taking medications to sleep at night.

“Last night, I dreamt I was in a school with glass windows, and I could see the shooter come in, and I couldn’t stop it.”

She said she has rarely talked publicly about the Red Lake shooting.

“I wouldn’t have been able to talk about it a couple years ago. I was scared to go to Walmart, anywhere there’s a crowd. I was always looking for exits, wondering, ‘Where am I going to hide when the shooting starts?’

“I’m getting better,” she said. “But I’ve realized, with this Connecticut shooting, that it will always be with me. I’ll always have to deal with it.”

Dodds said she has stayed in touch with some of the surviving students from her Red Lake classroom.

“We’ve been in touch the past few days,” she said. “It makes me feel good to be in touch with them because they know what I’ve been through. 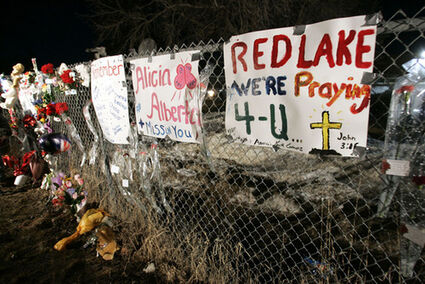 A makeshift memorial of flowers, signs and remembrances line a fence at the Red Lake High school. Herald file photo by Eric Hylden

“They’re like I am. They’re hurt and angry that this could happen to such young kids. A lot of them are parents themselves now. One said, ‘I want to make sure my kid never has to go through what I went through.’ There’s a lot of sadness, a lot of new grief for them.”

The advice she would give to the surviving students and teachers of Sandy Hook Elementary: “Give yourself permission to take the time to heal. It’s a long, long road. Give yourself as long as you need.

“The hardest part for them will be when everybody else has forgotten,” she said, noting that national media, listing deadly school shootings since Columbine in 1999, have tended to omit Red Lake High School.

“I would hope that in eight years people will still think of them,” she said, “and send them prayers.”