Basketball tournaments formats, locations modified for 2014 and beyond 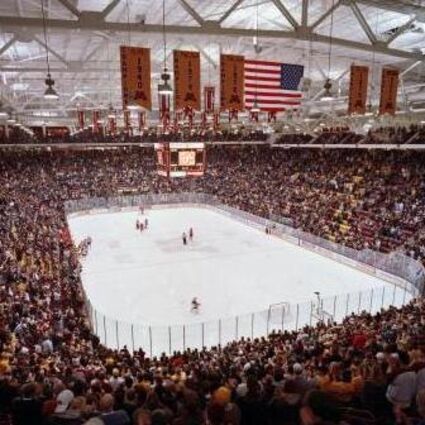 Mariucci Arena, the home of Gopher hockey, will host some state basketball tournament games starting in 2014

In addition to the flip-flop of weeks, the use of Mariucci Arena for both tournaments will come into play. In 2017 and 2018 the formats will revert to the traditional schedule of playing the girls’ tournament first and then the boys’ tournament.

Beginning in 2014, Target Center will host the Division I National Collegiate Hockey Conference tournament through 2018. The dates of that tournament fall in either the second or third full week of March.

An additional complicating factor involved the availability of Williams Arena at the University of Minnesota which has served as host of 10 quarterfinal games on Wednesday and Thursday for both tournaments since the semifinals and championship games have been played at Target Center. University officials have elected to reserve some dates at Williams Arena in future years to potentially host early-round games in either the NCAA or NIT tournaments for its women’s and men’s basketball teams.

The Board accepted the favored staff recommendation of switching the order of the two basketball tournaments for three years (2014-16) and then reverting to the traditional girls first-boys second format for the following two years (2017-18). The decision also allows eight teams from four classes to come to Minneapolis for the tournaments, the option preferred by both the Board and coaches associations over playing quarterfinal games at various Minnesota sites and then bringing only four teams in each class to Minneapolis for semifinals and championships.

From 2014 through 2016, the proposal accepted by the Board will allow the boys to utilize both Williams Arena and Target Center Wednesday through Saturday. The following week, when the new collegiate hockey tournament will be played at Target Center, the girls will primarily utilize Williams Arena and Mariucci Arena on the Minneapolis campus of the University of Minnesota. Target Center will be utilized for some quarterfinal games on Tuesday of that week.

Contractual arrangements with the venues must still be worked out, and staff will need to complete the details of which classes will play when and where.

“This solution is not ideal, but it is the least complicated to implement and meets the preference of the Board and the basketball coaches associations to maintain an eight-team Twin Cities tournament for all classes,” explained Associate Director Kevin Merkle who oversees boys’ basketball.

“We worked diligently with officials at both Target Center and the university to secure dates, then developed and shared various scenarios with a core group of coaches, region secretaries and athletic directors,” added Associate Director Lisa Lissimore who oversees girls’ basketball.

“League staff spent weeks working on this issue and presented the Board with two options,” said executive Director Dave Stead. “The other option was to combine genders and play the tournaments over that same two-week period, but that would have still necessitated the requirement of using Tuesdays and Mariucci Arena.”