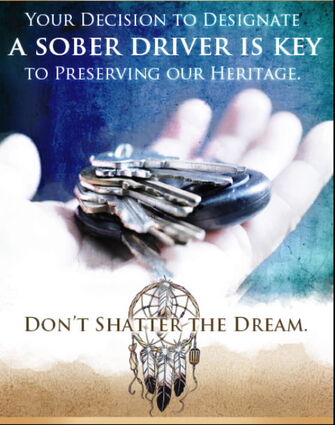 WASHINGTON, D.C. – Assistant Secretary – Indian Affairs Kevin K. Washburn today announced that, starting on December 14, 2012, the Bureau of Indian Affairs Office of Justice Services (OJS) will begin its “Don’t Shatter the Dream” campaign throughout Indian Country to prevent impaired driving during this holiday season. The campaign is being conducted by BIA and tribal law enforcement agencies through January 1, 2013.

“The ‘Don’t Shatter the Dream’ mobilization effort is a tremendous initiative that is conducted by the Bureau of Indian Affairs and tribal law enforcement agencies working together to keep drivers and passengers safe on Indian Country roads during the holiday season,” Washburn said. “I want to thank all of BIA and tribal law enforcement for their courageous service and efforts to promote and maintain traffic safety throughout Indian Country.”

The campaign unites the BIA with tribal law enforcement agencies across the country to reinforce the message that driving while impaired will not be tolerated. Officers will be on alert throughout this holiday season conducting checkpoints and patrols to protect those travelling on reservation roadways.

This is the eighth year that the BIA has worked with tribal law enforcement personnel to set up enhanced enforcement on federal Indian lands in an effort to reduce motor vehicle crash injuries and fatalities, especially those attributed to impaired drivers.

Getting alcohol- and drug-impaired drivers off the road takes a great effort. More than 1.4 million Americans are arrested annually for driving under the influence of alcohol or drugs. Police arrest an average of 161 drunk drivers per hour alone.

According to the NHTSA’s Fatality Analysis in Reporting System (FARS), Native Americans are killed and injured at crash rates two to three times higher than the national average. The high rate of traffic fatalities is a concern across Indian Country. In 2009, a total of 440 Native Americans were killed in motor vehicle traffic crashes across the United States. Of those, 47 percent of the fatalities occurred in alcohol-impaired driving crashes with a driver’s blood alcohol content at or above the legal limit of intoxication – equaling a total of 207 fatalities.

“One life lost or severely damaged due to an impaired driving accident is too high a cost for any family or community to have to bear,” said OJS Deputy Bureau Director Darren Cruzan. “I encourage everyone to drive and ride safely this holiday season and throughout the new year.”

The BIA Office of Justice Services is responsible for managing the Bureau’s law enforcement, detention facilities and tribal courts programs, either directly in tribal communities or by funding tribally administered programs through contract and grants.

The IHSP, a part of the OJS, is charged with meeting the traffic safety needs of the 566 federally recognized tribes. One of its goals is to decrease alcohol-related motor vehicle crash injuries and fatalities in Indian Country. Visit http://www.bia.gov/WhoWeAre/BIA/OJS/ for more information.

NHTSA’s mission is to save lives, prevent injuries and reduce economic costs due to road traffic crashes through education, research, safety standards, and enforcement activity. For more information, visit http://www.nhtsa.gov.