By Bettye Miller
Inside UCR 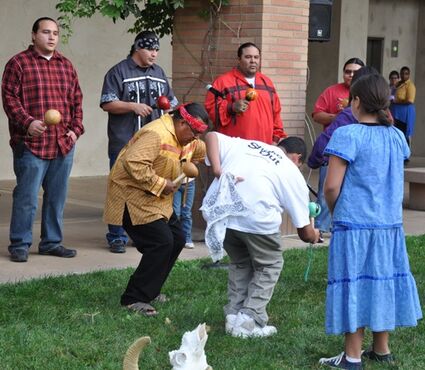 Kim Marcus (wearing gold shirt) leads dancing during the singing of Serrano-Cahuilla songs, including bird songs and mountain sheep songs, at the blessing of the Interdisciplinary Building, which houses the California Center for Native Nations office.

Native Americans from Inland Southern California gathered on the Interdisciplinary Building lawn Dec. 4 to perform a Serrano-Cahuilla ceremony blessing the structure that houses the California Center for Native Nations.

Students lined the upstairs balconies as more than 100 faculty, staff and Native Americans — including students from Sherman Indian High School in Riverside — arrived for the Tobacco Blessing Ceremony. 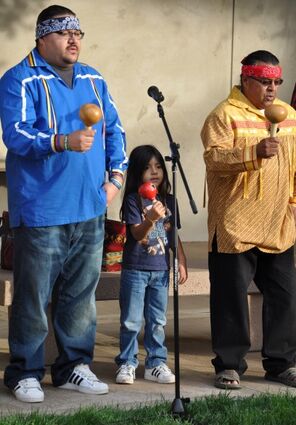 Kim Marcus (right), a Serrano-Cahuilla Indian, leads a group of singers in performing Cahuilla bird songs before the Tobacco Blessing Ceremony for the California Center for Native Nations. Among the singers are his son, Raymond (left), and grandson, Anthony (center). Tobacco is sacred to Native Americans, who believe it to be a gift from their creator. The ceremony itself may not be photographed. Kim Marcus led chanting in the Cahuilla language as he and other singers blew tobacco smoke through an owl feather in the four cardinal directions.

Tobacco is sacred to Native Americans, who view it as a gift from the Creator, explained Cliff Trafzer, Rupert Costo Chair in American Indian Affairs and director of the California Center for Native Nations. The center, established in 2000, relocated to the Interdisciplinary Building from the Costo Library in the Tomás Rivera Library two years ago.

The Tobacco Blessing Ceremony asks for good things to happen to people associated with the building and for evil to stay away, said Kim Marcus of the Santa Rosa Band of Cahuilla Indians. Marcus led other ceremonial singers in chanting in the Cahuilla language and blowing tobacco smoke through an owl feather in the four cardinal directions.

Henry Vasquez, of the Native American Community Council of San Bernardino and Riverside Counties and a UCR alumni, began the event by playing Native American flutes. The Tobacco Blessing Ceremony followed, along with bird and mountain sheep songs, and the Coyote Dance, which is performed infrequently.

The California Center for Native Nations is a research center dedicated to preserving the history, culture, language and sovereignty of California tribes, and connects tribes with UC researchers whose expertise can help solve problems unique to native nations.