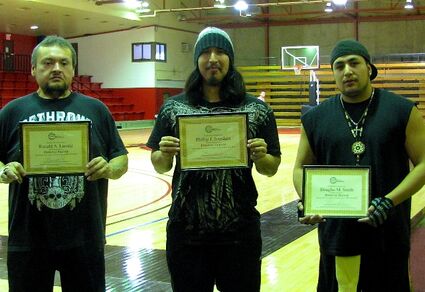 A level of professionalism has been added to the Fitness Center. Activities Director Ron Lussier, along with Phillip Jourdain, and Douglas Smith display their certificates verifying them as certified trainers and available for consultation.

When the new Red Lake casino was built on Highway 89, Red Lake Chairman Floyd Jourdain Jr., said (in the State of the Band address) that the tribe would “return the Humanities Center to the people.”

Now the refurbished Humanities Center or the Red Lake Recreation Center, is nearly complete and without a doubt a first-class, multi-use facility. The building hosts a physical fitness center, a walking area, a college regulation basketball court, a small fitness center just for women, and more. In two years it will also be the home court for a soon to be developed Red Lake Nation College Basketball Team to be known as the Migiziwag, (Bald Eagles) the logo of which is already painted on the gorgeous hard wood floor.

Red Lake Tribal Chairman Floyd Jourdain, Jr., took pride when talking about the Humanities Center being returned to the people. "Some people may come through the door and see only this gorgeous basketball court, or the state of the art fitness Center, but it's much more than that," said Jourdain, "it's about health, fitness, and above all education."

"Although this will be the home court for the future Red Lake Nation College Team, the Red Lake Migiziwag (Eagles), the facility is for the entire community," Jourdain reiterated. The new tribal college Migiziwag logo is painted on the center floor already.

Basketball, as everyone knows, is big at Red Lake High School and the entire reservation. "We hope to capitalize on this interest to keep kids in school and go on to higher education," said Jourdain. "This way players can move on from High School to the tribal college and play basketball, and then move on the BSU or other University and continue to play. We know we have the talent, and we hope then to have many Red Lake collegiate players end up playing pro-ball like Ben Strong."

Red Laker Ben Strong is now playing with the "Iowa Energy" development league for the NBA. Ben has kept his ties to the Reservation and hosts "Big Ben's Basketball Camp annually.

"The 2015 college team will come in phases," says Red Lake Nation College President Dan King. "The floor of the basketball court has been expanded a bit so that it meets college regulation. Three three-point lines are drawn on the floor, red line for High School, black line for college, and blue line for pro-ball in case we get some exhibition games or the Globetrotters."

The Red Lake Nation College is housed in the upstairs east side of the Humanities Center, and is happy to have the fitness center and court nearby. The college has a fitness class that uses the facility now as part of curriculum.

"This effort has been a collaborative initiative for the Tribal College, Red Lake Planning & Economic Development, the Tribal Council, and the Boys and Girls Club," said King. "Basketball is very much a part of a post secondary effort to hook the kids into college basketball. Many players stop at high school, we want them to go on to college and if basketball can help, great. It's a mechanism to try and keep youth in school. And then we hope that youth will discover that there is life beyond basketball."

The college is looking for a coach and has their eye on one of the legendary players from the mid 90's record-setting state tournament, the three-point whiz, history-making, Gerald Kingbird.

"This will be the first "all Indian" college basketball team when it premieres in 2015," concluded King.

Funding for the Recreation Center project came from the same Shakopee Mdewakanton youth initiative grant that built the skate park and the new basketball courts in Red Lake and Ponemah. The Shakopee grant is geared toward education and health for youth.

"The Red Lake Nation College and the new government center are the biggest things to happen on the Rez since Roger (Jourdain) brought in the Red Lake hospital," Jourdain said. "It's a bigger deal than casinos because it's an investment in the future. It all goes well beyond that beautiful floor, it goes beyond to the college, to the high school."

Ron Lussier, Activities/Cultural Director at the Rec Center talked enthusiastically about the possibilities of the renovated building on a recent tour. Upon entering the building the court floor catches the eye with it's color and shine.

"In the early 80's the floor was taken apart and put away," said Lussier. "Recently it was recovered, sanded, painted and reassembled. Tribal members come in and think it's a new floor." Lussier pointed out that the floor can still be used for events, as a tarp that covers the entire floor, can be rolled out in about 15 minutes.

Another eye catcher upon entering the building is the bold color of the bleachers. Building maintenance workers Arnie Wood and Shawn Lussier painted the bleachers to the main floor. They also reconditioned the long overdue restrooms under and behind the bleachers. A new hot water heater for the Rec Center has made possible both men's and women's showers, as well as a changing room for women.

Looking around the large room, one notices that the floral design on the stage has been touched up, and wood paneling to right of stage was put up to replace the dry wall as players kept banging into it.

The Red Lake Recreation Center is open and staffed 9 to 9 each day. The building has added new security measures that includes all doors with new locks.

The Rec Center now hosts an Independent men's league. There are sixteen teams according to Lussier that sometimes play four games a night, two nights a month. "The drug abuse prevention programs fund the whole thing," noted Lussier, "lots of fans come to watch. There are several teams from Red Lake, plus two teams from Cass Lake, Clearbrook, Blackduck and Bemidji all come to play."

Lussier says that teams are getting more competitive and may start using the blue or NBA line for shooting 3 pointers. Lussier is looking forward to the arrival of a new score board and shot clocks that are coming soon.

"I expect the Humanities/Rec Center to be a hub of activity. When we have basketball games here, it’s not unusual to have a hundred people come to watch,” said Lussier. “We also have co-ed volleyball. The 7th and 8th grade teams practice here, and High school girls basketball plays here once in a while.”

The Humanities Center/Recreation Center will still be available for funerals, boxing matches, concerts, youth activities, powwows, the State of the Band message, and more as needed.

A level of professionalism has been added to the Fitness Center. Activities Director Ron Lussier, along with Phillip Jourdain, and Douglas Smith have gotten their certification as certified trainers and are available for consultation.

“The fitness center has state of the art machines; two bikes, two ellipticals, four treadmills, medicine ball, free weights, universal gym, and a big screen TV,” says Lussier. "At the start of basketball season, the fitness center will get even more use as players wives come in to watch games and use the fitness centers. We’ll encourage more walkers to walk the perimeter of the court especially during inclement weather. Tribal directors have the option to grant employees one half hour a day for fitness or exercise with pay, some come to the Red Center at noon for that purpose to walk or play a little basketball.

As one enters the Rec Center, up top of the bleachers and to the far left is a woman's fitness center groomed especially for women who may want a little more privacy in their work-outs. It's smaller but has a TV, free weights, elliptical, bike and two treadmills. The Ikwewag Fitness Center was championed by Boys and Girls Club Director Dawn Huseby and is looked after by women from New Beginnings, Misty Dow and Carrie Spears.

The area on the North end of the Humanities Center which formerly housed the old Red Lake casino is now in development as the Red Lake Nation Boxing Club. The area was originally refurbished to house an elder center, but elders decided to stay where they were on the top floor of the Humanities Center, mostly due to the lack of windows in the old casino area.

The Red Lake Nation boxing club is now open from 1 to 9 p.m. The club is being run by Richard Clark, a former boxer who won the nationals twice as a youth.

"There is a lot of talent on the Rez," said Clark, "and youth are starting to discover the facility here. We've been open, but not fully functional since early October. On some days up to 20-25 kids come through the door."

Clark works with people between the ages of 8 and 31, and is looking soon to put together competitive tournaments.

"Red Lake used to have one of the best boxing teams in Minnesota from around 1977 to 1982," said Clark. "Eventually there will be competition in various weight classes, as we look to compete with the many boxing clubs across Minnesota. The Pro-boxing commission helped get the ring at a cost of $9000, its purpose to develop amateurs. The ring can be dismantled by four people in about two hours so that it can be taken to casinos and other places for exhibitions. Its brand new. A local artist painted the Red Lake logo on the boxing ring matt for a cost of $900 which will include logos at the corners as well."

While showing a closet full of new gloves and other boxing equipment, Clark showed off the oldest piece saved from the last time Red Lake had a boxing club…a punching pillow.

"I can remember hitting that pillow when I was 14 and now I'm 50," said Clark with a smile.

On the drawing board for the near future at the Center is new LED lighting.

"LED lights will be much better, cost less, and last one-third longer," says Lussier. "We will be replacing the wood pellet furnace as soon as we can. There are few places that even sell pellets any more, and it's costly to ship. The boiler is from the late 60's, so it's overdue to be replaced."

Lussier said the plan is to buy a new propane furnace. This will not only save money be being more efficient but will save money in the long run by using the tribally owned Red Lake Propane as vendor.

A sauna is also planned for the Rec Center, and according to Tribal Chairman Floyd Jourdain, Jr., the painting by Robert Desjarlait (that greets drivers at the rez line) "The Council of Clans" will be painted on the north wall of the Recreation Center.

Down the road, Lussier would like to see more and other activities. “I’d like to see the swimming pool here be repaired and re-opened," he said.

And Lussier wants to put together more activities for youth.

“It’s so important that youth have something to do on the Rez,” said Lussier. "I want to not only see the kinds of recreation that are current, I’d also like to see more social things for youth, perhaps dances or concerts, a way for young people to get together”.

Lussier said that years ago “we used to have swim classes from the high school, roller skating and ice skating, although ice skating will be out because of the floor, and roller skating isn’t as big as it once was.” 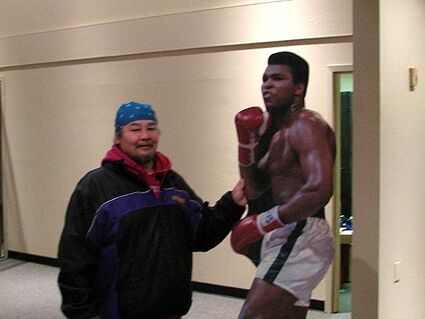 The Ikwewag Fitness Center is staffed by New Beginnings

When Indian Gaming began, the Humanities Center was used — for a short-lived time — as a bingo hall with a casino on the North end. The bingo hall lasted only a short time, but the casino lasted until early 2010 when a new first class casino was built near the south reservation line.