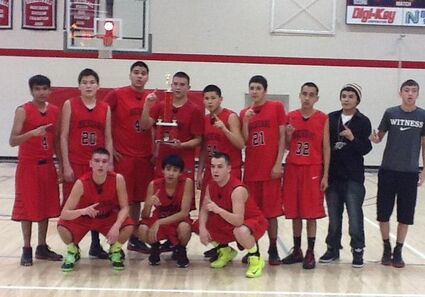 THIEF RIVER FALLS - Ada-Borup came out strong in the first half of the Championship game, played at North Country Technical College on Friday, December 7, 2012. At one point they led the Warriors 20-9 and Red Lake had a hard time finding the basket.

But once Red Lake came alive, they fought back hard and went on a 12-point run to take the lead for the first time of the game, 21-20. The lead exchanged hands right up to the half, with the Warriors ending up on top 29-28 at the half.

Red Lake began to dominate in the second half, at one time leading Ada-Borup 45-33. But the Cougars never slowed down, coming on strong and aggressively forcing Red Lake turnovers, and came to within one point, 59-58, near the 2 minute mark.

The two teams exchanged baskets a couple of times, before the Cougars had two players foul out and Red Lake capitalized with their free-throw shooting. The Warriors fought off Ada-Borups last attempts at a couple of changes to tie the game, taking home the win, 63-60.

It was the Warriors first time winning the NCTC Holiday Tournament, and they improve their record to 3-0 on the season.

Ada/Borup finished the game 14-21 from the free throw line. They grabbed 47 rebounds, had 12 steals and committed 17 turnovers.

According to the KKCQ Radio website, Junior Ryan Holthusen after this tournament is now only 48 points away from breaking the all-time scoring record in this tournament. Last year Holthusen set the single tournament record by scoring 89 points in three games. 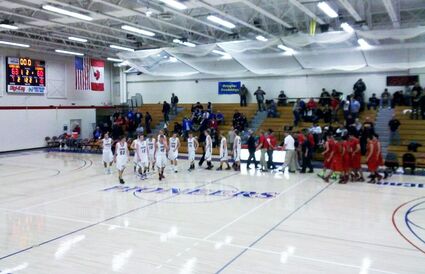 The current all-time tournament record is held by Aaron Chaput of Red Lake County Central from 1991-1995 with 263 total points. Holthusen is currently at 216 points in three years of participation in the NCTC Holiday tournament.

Finishing in 3rd place at the tournament was Grygla-Goodridge with their 56-50 win over Fertile-Beltrami, and B-G-MR defeated Red Lake County 70-45 for 5th place.

The Warriors are at home for 3 games in the coming week, while the girls have 2 home games. They are both 3-0 on the season. Both varsity games for the Laporte and Cass Lake games will be played in the same gym, girls playing first, followed by the boys. They will host Laporte on Dec. 11, Cass Lake on Dec. 13 and Walker-Hackensack-Akley on Dec. 14. On Dec. 20th they will host Thief River Falls.