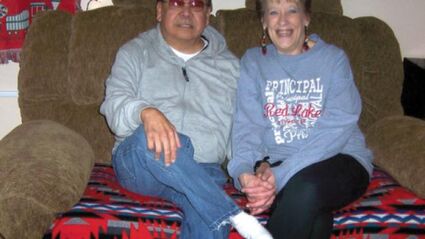 A celebration for former Red Lake Elementary School Principal Jean Whitefeather, right, is planned tonight at the Eagles Club in Bemidji. She and her husband, Vernon, live in Bemidji. Monte Draper | Bemidji Pioneer

BEMIDJI – In the fall of 1979, a young Bemidji State University graduate began her career with the Red Lake School District.

“I started as a music teacher for kindergarten through sixth grade,” said Jean Whitefeather. “One day a week, I went to Ponemah.”

The Ponemah connection proved not only satisfactory professionally, but a personal gift as well. She and Vernon Whitefeather, a teacher of Ojibwe and American Indian history, met there. They married in 1981 and have a grown son, Kyle, a daughter-in-law, Holly, and 2 ½-year-old grandson, Isaac.

“She is my anchor,” said Vernon.

“Then we started our first in-school suspension program; I started up that program,” she said.

In the early years, the elementary school was located in what is now a high school wing, currently under renovation. “They had the teacherage there,” Jean said of the housing arrangements provided. “We lived in the teacherage for a couple of years.”

In 1993, then Red Lake Elementary Principal Roger Schmidt moved into the position of school superintendent and suggested Jean take over as elementary principal. The district built a new elementary school in that same year, so Jean has been the sole principal. When she announced her plans to retire, the Red Lake School Board hired the new Principal Reed Carlson to take her place. Jean stayed on into November to help him and staff make the transition.

Because she has served Red Lake for more than a generation, Jean said she has taught and supervised youngsters who are the children and grandchildren of those attending the school when she started her career. Now the school employs about 125 staff members who serve 600 students.

Jean said one of the tenets of her administration has been to create a positive environment for students and their families.

“You need to feel like you’re welcome and supported – not just the kids,” she said. “You spend more time there than in your own home.”

Consequently, staff members and students celebrate happy times together, as well as helping each other through the inevitable difficulties, and sometimes tragedies in life.

Jean recalled one of the events she and a colleague put together for fun. They challenged the students to complete a quarter with 90 percent homework accomplished and 90 percent attendance. If the students succeeded, Jean told students she would spend the night on the school roof. The students came through, and Jean camped on the roof as promised. She said mothers brought food for them to add to the celebration, but it happened to be one of the nights of the fish fly hatch. Clouds of the short-lived insects swarmed the roof lights, she said.

“It was a lot of fun, and I know kids remember it,” Jean said. “People still talk about it.”

As for the hard times, she said, “We just kept going, helped each other and understood everyone would deal with it in a different way. Just understand and telling everyone to be understanding.”

Jean also cited some of the innovations at the school during her tenure. The responsive classroom requires daily meetings with everyone welcomed by name and goals for the day discussed. The district was also able to make the BSU teacher practicum experience more efficient. Instead of student teachers coming into a classroom for a couple of hours several times a week, they were able to spend a full two weeks of entire school days fulfilling their practicum requirements. The arrangement saves on commuting and gives the student teachers a better understanding of classroom life.