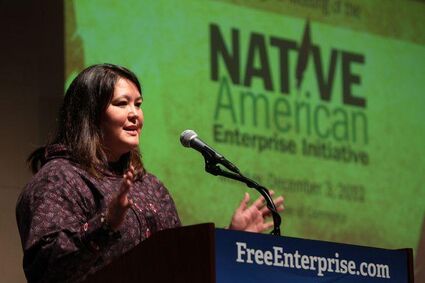 Helping tribes and tribal entrepreneurs across the country boost economic growth can serve as a crucial part of the solution to the problems facing Indian Country today, so said tribal leaders, business owners, and government officials who met this week at the inaugural meeting of the U.S. Chamber’s Native American Enterprise Initiative (NAEI).

Kevin Washburn, Assistant Secretary for Indian Affairs and a member of the Chickasaw Nation, pointed out that joblessness is a serious problem in Indian Country. Just like entrepreneurs across the country, Native American business owners need access to capital, and they face unique barriers that can stand in the way of their economic success.

The President and CEO of Black Hills Corporation, David Emery, a U.S. Chamber board member and member of the Cheyenne River Sioux tribe, spoke of the transformation that is taking place across Indian Country. But without action to promote economic diversification and push for the removal of bureaucratic barriers, they will not be able to fully benefit from that opportunity.

Members of Congress including Congressman Don Young (R-AK), and Senators Lisa Murkowski (R-AK) and John Hoeven (R-ND), who both serve on the Senate Indian Affairs Committee, spoke about the need for Congress to place greater consideration on how Native Americans are impacted by major pieces of legislation like the health care law.

Energy development is also an important focus for Indian Country, as leasing permits on tribal lands can often be held up indefinitely, while interest for the project dries up and the developer moves on to other locations.

At its core, the U.S. Chamber is an advocacy organization, which represents the voice of the business community and works to foster the spirit of enterprise. The NAEI was created to harness this advocacy on behalf of this emerging sector of our economy, where economic activity is growing, but challenges and barriers exist as tribes navigate legislative and regulatory barriers.

Joel West Williams, who serves on NAEI’s Leadership Council as a member of the Cherokee Nation, noted that a recent economic impact study for the state of Oklahoma found that the Cherokee Nation had an economic impact of $1.2 billion in the state, and employed over 8,000 people. Through an aggressive advocacy agenda before Congress and the administration, and promoting foreign direct investment on tribal lands, the NAEI will work to increase the economic impact of tribes and tribal entrepreneurs across the country.

Ultimately, what’s true for entrepreneurs in Indian Country is true for all entrepreneurs – to truly allow them to thrive and generate economic growth, Washington must create an economic climate that provides certainty and removes the hurdles in front of job-creating policies like energy development and trade.

Though Indian Country faces significant challenges and barriers to economic success, the potential to boost economic growth and job creation is tremendous. As Tara Sweeny, senior vice president of the Arctic Slope Regional Corporation pointed out, it is how we move forward and address those challenges that will define the success of this initiative. The NAEI recognizes that responsibility and is committed to achieving results and helping tribal leaders and entrepreneurs capitalize on their vast opportunities.