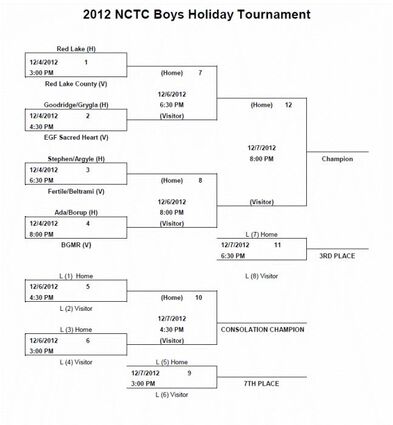 THIEF RIVER FALLS - Leading 48-31 at the half in the 2012 NCTC Holiday Tournament in Thief River Falls, the Red Lake Warriors advanced to the next round with their 78-47 win over Red Lake County on Tuesday, December 4, 2012.

It was the Warrior's first game of the season and will play Grygla-Goodridge on Thursday at 6:30 PM. with an opportunity to advance to the championship game. Gygla-Goodridge defeated EGF Sacred Heart 76-38 in the latter game.

Leading all scorers for Red Lake were Ryan Holthusen with 26 points and 7 rebounds; James Jourdain with 21; Aaron Beaulieu had 19, Russell Barrett added 5 points and 12 rebounds; Darion Cobenais with 4, and Tarrell Charnoski 3. Red Lake out-rebounded their opponents 34-23. No Red Lake County players were in double figures for the game.

The championship game for this tournament is scheduled for Friday, December 7th at 8 PM.