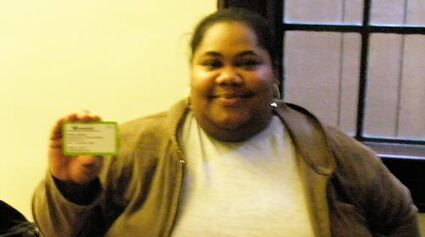 BERKELEY, Calif. – A routine physical in 2004 at LifeLong Medical Care, a community health center in West Berkeley, showed Kelly Parker, unemployed and uninsured for almost two years, that she was overweight and had diabetes.

Doctors at the center quickly put Parker, then 30, on medications, urged her to go on a diet and follow an exercise regimen – all for little or no cost. The incentive was enough for Parker to never miss a doctor’s appointment or periodic checkups at the clinic from then on.

On one of her visits to the clinic last year, LifeLong told her she qualified for HealthPAC (Health Program of Alameda County), a program the county launched in July 2011. LifeLong told her they would enroll her in it right away. And what was “really nice” about being in the program, she was told, was that as a HealthPAC member she wouldn’t have to make co-payments when she came to the clinic, and medicines would cost her nothing. Additionally, enrollment was free and membership needed to be renewed only once a year.

“It was great, and I was happy,” Parker said.

HealthPAC replaced the County Medical Service Program /Access to Care for Everyone (CMSP/ACE), which was available to Alameda County residents whose income was under 200 percent of the federal poverty level (fpl), or $22,340 for an individual. Two of HealthPAC’s components – HealthPAC Medi-Cal Expansion (MCE) and HealthPAC Health Care Coverage Initiative (HCCI) are part of California’s Low-Income Health Program (LIHP), a “bridge” to the Affordable Care Act (ACA), which is set to be fully implemented on Jan. 1, 2014. When that happens, HealthPAC MCE patients will be absorbed into Medi-Cal (called Medicaid in the rest of the nation).

The third component, HealthPAC County, provides coverage for even the undocumented, and is not a part of LIHP.

One of the provisions in the ACA would expand Medicaid, the federal-state safety net for low-income Americans. Among other things, the expansion eliminates some of the current eligibility requirements in Medicaid, like the so-called “asset test” where an individual cannot have financial assets exceeding $2,000, as well as the requirement that an individual has to have a child under 21.

California, as well as six other states in the nation, sought the so-called Medicaid 1115 waiver that states were allowed to apply for last year to set up LIHP so they would be ready for the expansion in 2014. The waiver allows the states to draw down federal dollars to finance the program. Only a handful of counties in California, including Fresno, have opted out of LIHP.

The California Health Care Exchange, an online federally subsidized insurance marketplace, also set to launch on Jan. 1, 2014, will absorb HealthPAC (HCCI) enrollees – those whose family income is between 134 and 200 percent of the fpl.

Between the two provisions, millions more low-income people are expected to have health insurance coverage, closing the gap between the insured and the uninsured.

HealthPAC coverage is not insurance, and in Alameda County, it cannot be used outside the Alameda County Medical Center and the 11 community health clinics in the HealthPAC network. The program allows patients to receive free primary and specialty care, chronic disease management, medication and emergency treatment.

Most of the enrollment is done when patients go to the county’s network of hospitals and clinics. LifeLong Medical Care is in the network, which is where Parker was enrolled.

HealthPAC administrator Danice Cook said there has been a surge in enrollment in all three components of the county’s low-income health programs since it changed its name to HealthPAC in 2011 because people can associate the name with health care. There are currently about 85,000 people enrolled, the largest percentage of them from the Hispanic community (42 percent), followed by Asian/Pacific Islanders (16 percent), African Americans (14 percent), whites (9 percent), 8 percent in the “other” category and 11 percent whose ethnicity is unknown.

Unlike Medi-Cal, where the eligibility requirement includes having to be between 19 and 64, have a family income at or below 133 percent of the federal poverty level (about $14,500 for an individual and $29,700 for a family of four), have a child under 21, and a US citizenship for at least five years, HealthPAC enrolls even childless individuals in that same age group, with family incomes between 0 and 200 percent of the fpl. The citizenship requirement remains the same.

“In most ways the scope of services mirrors Medi-Cal, but there are some differences,” said Danice Cook, HealthPAC administrator with the Alameda County Health Care Services Agency. “The biggest difference is the limited network of providers and differences in the way that pharmacy and other ancillary services are provided.”

Cook noted that HealthPAC is a lifeline for hundreds of thousands of people.

“A program such as HealthPAC is important because it provides some form of access to basic and ongoing primary and preventive care services for uninsured participants who are typically not eligible for public health insurance programs, can’t afford private insurance and/or not getting employer-sponsored insurance,” she said.

Parker is glad that HealthPAC’s eligibility requirements are not as stringent as Medi-Cal’s. When she lost her job in an East Bay flower shop in 2002, and with it her employer-sponsored health insurance, she said she tried unsuccessfully to get on Medi-Cal.

“I was told I was not eligible,” she said, speculating it could be because she was a childless adult.

Last year, Parker adopted a 2-year-old boy. She realizes that as a responsible mother, she needs to take better care of her health.

“I have a new responsibility,” she said, adding: “But having a HealthPAC (MCE) card gives me a lot of peace of mind.”

This article was made possible by a grant from The California Endowment, and was produced as part of New America Media’s series on the Affordable Care Act.