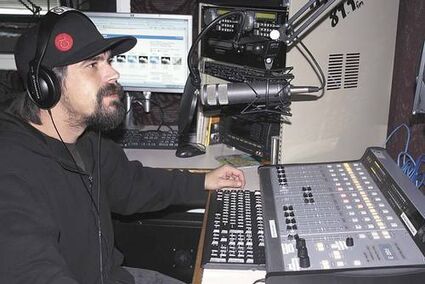 Niijii Radio can once again be heard on 89.9 FM, as it is broadcast from Callaway. JoDan Rousu’s “Cup of Joe” has helped the station stay alive since its inception last November when it was founded as a community station. Paula Quam / Forum Communications

CALLOWAY, Minn. – More people on the White Earth Indian Reservation and beyond are now waking up to a “Cup of Joe” – the morning show, that is, which is once again broadcasting from Niijii Radio.

The Callaway station, located at 89.9 on the FM dial with the call letters KKWE, was shut down for several months after it was struck first by Mother Nature (a lightning strike), then by thieves who reportedly got away with expensive studio equipment.

All summer and into the fall, the station sat completely disassembled – from its studio to its volunteer base to its management.

But Niijii, an Ojibwe word for “friends,” had enough friends and fans to resurrect the quiet station.

One year after the Native American station initially hit the airwaves, it is back up again.

According to Niijii Radio General Manager Margaret Rousu, supporters of the station not only did fundraising to get Niijii back on the airwaves but a $20,000 state grant put them back where they needed to be.

It’s allowed them to engineer the studio back into action and assemble a three-person paid leadership team, which is now rallying the troops of volunteers to help provide the on-air talent.

In addition to the $20,000 in operating funds, the station also received a $115,000 grant from the Legacy Art Culture and Heritage Fund of Minnesota to create local programming.

“We’re going to practice our values as Native American people and as a Native American station so that what we play reflects our values,” said Rousu, who says they have big plans for a variety of culture-based programs.

“We have a gal who is doing a folk song show where she’ll take an old folk song, tell us the history of it and then perform it,” said Rousu, “We’re excited about that one.”

Douglas “Ruggy” Lee, of Frazee, has created a Friday night show that not only features hip-hop but local artists who dream of breaking into the music industry.

“It’s important to help this community and those musical artists going in that direction,” said Lee, “to give them exposure on the radio and drive to keep going so that they realize that this is a possibility … to give them confidence that this could be a reality for them.”

Steven Bickell is another DJ who was one of the original volunteers for the station.

The 22-year-old Audubon man is the chief operator at the station and says the experience he’s gained at Niijii has opened his eyes to what a radio station can do. “It’s for the community and about the community,” said Bickell, “and if somebody has an issue or something coming up, they should bring it to us. If they’re doing a benefit for a family friend who has cancer, let us know – I just want people to know we’re here.”

JoDan Rousu is the voice behind “Cup of Joe,” and the lead producer and program director. Despite the theft and down time, he says Niijii stronger now than it’s ever been.

“We did have to purchase some new equipment, but we also repurposed some,” he said, “so we’re fully functional with top of the line, commercial grade automation software and we’re hoping to be ready to stream live over the Internet again by Dec. 1.”

Streaming is important to the station, as Rousu says they have a lot of fans down in the Twin Cities who listen to them via the Internet. That’s why the next fundraiser for the station is being held there.

Oshki Akiing is what they’re calling the event happening at the Parkway Theater on Dec. 20 in Minneapolis.

To find out more on the fundraiser or the station, log on to http://www.niijiiradio.com.