Tour and Sit-Down with Sheriff Hodapp 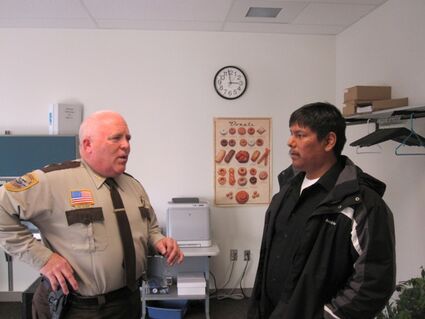 Sheriff Hodapp gives Tim a little background on how the Sheriff's office is organized.

Commissioner-Elect Timothy A. "Tim" Sumner visited the Beltrami County Administrative Building about a week after he was elected County Commissioner from District 4. He won the race over incumbent and fellow Red Lake member Quentin Fairbanks who has served in that capacity for 12 years. Sumner will be the third Commissioner from Red Lake, Sandra King being the first Indian ever elected to a county commissioner seat in the state back in 1996. She served one four-year term.

Sumner had an appointment to be interviewed by Lakeland News (Public Television) and to get more familiar with where he will soon be working. Sumner also took the opportunity to visit with Beltrami County Sheriff Phil Hodapp, and get a tour of the Law Enforcement Center. Sumner will be sworn in on Tuesday, January 8, 2013.

Current Auditor/Treasurer/Interim Beltrami County Administrator and soon to be County Administrator Kay Mack took time from duties as Auditor (recounting ballots from a Blackduck Mayoral race) to greet and introduce herself to the new County Commissioner. Mack said that she believed that Sumner was the youngest person ever elected to the County Board, and certainly in the last 30 years.

Mack, who has been Auditor for many years which means she is responsible for all elections in the county except Tribal, took time to compliment the elections judges at Red Lake. "Working with the judges from Red Lake has been a joy," Mack told Sumner, "Red Lake has some of the best election judges in the county." Sumner offered that it will be good to work with a County Administrator who knows Red Lake as well as Mack.

After visiting with Administrator Mack for a moment, County Commissioner Joe Vene (in the building to collect some mail) noticed the Commissioner-Elect, and came in for a brief visit and to offer congratulations. Commissioner Vene ran unopposed in this years election.

Sumner, having previously set up a tour of the Law Enforcement Center, walked the few steps to the building and was greeted by Sheriff Phil Hodapp, who then offered congratulations to Sumner and proceeded to give Sumner a tour.

Hodapp pointed out that the County and the City of Bemidji share the space and operation of the Law Enforcement Center to save costs. The Sheriff's office has a substation in Kelliher where two deputies are assigned. Hodapp says that the northern part of the county doesn't get a lot of calls except during hunting season. Sumner asked specifically about the Fourtown area, an area where he did well in in the election. Hodapp said that the Citizens Patrol helps greatly in that area, and also that Marshall County, where Grygla is located, helps out Beltrami quite a bit too as it is so far from the county seat.

Ninety people work for the Sheriffs office said Hodapp. "We have 36 deputies, 30 who work in corrections, six in court security, six in records, and twelve dispatchers. We count a lot on volunteers too," Hodapp pointed out to Sumner, "which includes the Citizens Patrol and the Mounted Posse, among others."

Sumner asked what most of the calls were for in Sumner's commissioner district. "Most of our calls from the northern part of the county are for medical, and rescues from hunting or lakes," said Hodapp. "We have an aging population in Beltrami County. Many people come here to retire to the woods, and seems like a lot of young people move away."

As a county Commissioner, Sumner works with the County Administrator, and the Administrator sees to it the Board's agenda is carried out by county staff. The Commissioners work only through the administrator and supervise no one else. The County Sheriff, County Attorney, and County Auditor/Treasurer are all elected offices and do not answer to the County Board.

"We all work as a team equals for the benefit of the county," said Hodapp.

Hodapp further pointws out that the Sheriff's office also works with law enforcement organizations throughout the county, and that he meets quarterly with City Chiefs of Police, as well as public safety directors from Leech Lake, Red Lake and White Earth.

"We share information, and help each other when we can and if need be" said Hodapp. "We often do joint investigations with the FBI as well."

Hodapp said he believes that he has a good working relationship with Red Lake Public Safety Officer Bill Brunelle.

Sumner asked what the largest expense was for the Sheriff's office, and Hodapp answered purchasing and maintaining their fleet of Deputy vehicles. While sharing the Sheriff's budget with Sumner, Hodapp invited the new Commissioner to ride along with a Sheriff's Deputy in the near future and see how they operate for himself. He also invited Sumner back to take a tour of the jail and court complex at some future time.

Tim is engaged to be married to Rhiannon Barrett, they have four children - one son and three daughters. He grew up in Ponemah and graduated from Red Lake High School. Tim is an AmeriCorps Alumnus, and is a current member and former officer of the Red Lake Political Education Committee. (RLPEC)

"I come from a background of folks who believe in public service," said Sumner.

Commissioner-Elect Sumner invites all to contact him freely by phone, email, and to check out his Facebook site from time to time.

In what may be the another "Red Lake First," two Red Lake Nation members vied for a seat on the Beltrami County Board of Commissioners. "It very well could be the very first time in state history that two American Indians have competed for a non-tribal office," said County Auditor Kay Mack. This might be tantamount to the first time we have two women or two Gays running for governor or president, a significant if subtle step forward in race relations.

The numbers for Commissioner-Elect Sumner, 12-year Commissioner Quentin Fairbanks, and a late write-in candidate Vince Gross of Hines were as follows: There were 1767 votes cast in the District 4 Commissioner race's 26 precincts. There was a 79% voter turn-out in the district. Sumner received 1767 votes for 49.4%, Fairbanks garnered 1336 votes for 37.3%, and about 13% were cast for Gross.

Red Lake itself voted at about 82%, and may have had the highest percentage of votes for communities of similar size for President Obama at 98%. In Ponemah it was 99.23%.

Sumner, who said his slogan was "New Leadership; Fresh Voice" said he would visit with the Tribal Council at monthly meetings from time to time to maintain good communication.

"I think it's important to have that government to government relationship, there are ways the county and tribe can work better together," he said. "I'll also do the same for city governments in the district if they would like me to visit on occasion."

When questioned about communication with the Sheriff's office, Sumner said that he learned a lot in his visit with the Sheriff and said he looked forward to visiting with him more. "I'll do all I can to work with all county Directors and programs, as well as the Sheriff, to maintain open and good communication."

Sumner said it was important to treat everyone the same in the district both on and off the reservation.

It does appear to be the first time in Minnesota history that two American Indians have run against each other for a non-tribal office. Fairbanks, a Red Lake member has served 3 terms or 12 years. His predecessor Sandra King, who served one term, (1996-2000), was the first American Indian in the state of Minnesota to be elected as a County Commissioner. She beat a well-liked, Blackduck resident Richard Florhaug in a very respectful campaign.

District 4 is a mix of Indian and non-Indian. It is in the northern half of the county, and represents about half the land in Minnesota's 3rd largest county. Often Red Lake Indians would run for this commissioner seat, but four or five would file and split the vote often leaving two non-Indians running in the general election. 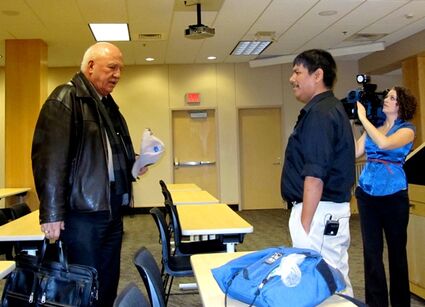 In 1996, both Daryl Auginash and Sandra King wanted to serve. Auginash, after further consideration, decided not to run, leaving King and the incumbent commissioner Florhaug to run in the general election. The Red Lake Tribal Council (at the time being chaired by former Chairman Bobby Whitefeather) did not endorse King. However, somewhat coincidently, the non-partisan Red Lake Political Education Committee (RLPEC) a tribal non-profit, was formed that same year. The group continues to this day to educate voters and provide information on candidates and issues for all political races. RLPEC also conducts voter registration drives, and then helps get voters to the polls.

King managed to secure the support of an off-resevation farmer Joe Nipp, who aided King's effort. Nipp was a special guest at King's victory celebration. King secured at least one vote in each of the some 27 townships and cities and won the township that Nipp was from.